Tyson Fury is both deeply religious and a spectacular orator – put the two together and you get something deeply spellbinding, as a church congregation in Nevada found out this weekend.

Fury is currently in Las Vegas in camp preparing for the biggest boxing fight of his life – a world heavyweight title unification match against fellow Briton Anthony Joshua.

But the 32-year-old ‘Gypsy King’ took time out from training to attend church at the weekend. And he held the congregation spellbound with the story of his biggest fight outside the ring – the one for his very soul and survival.

He told of how he’d considered suicide when he ballooned to 400lbs. Beset by drug and alcohol addiction, only one thing saved him.

He said: “There’s been many times in my life when I’ve been down as low as any man can go. I even attempted to take my own life a few short years ago. 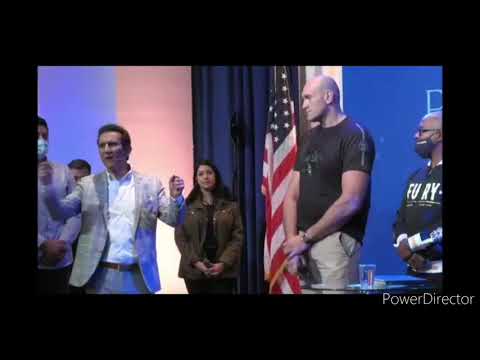 “So I know what it’s like to have the highest highs in life and the lowest lows. Without God there can never be any fulfilment.

“I’m a man who had everything – I had money, fame, achievements, a family – but I was empty inside and I was longing for God’s fulfilment the whole time.

“There was a time in October 2017 when I was weighing 400lbs in weight, I was addicted to drugs and alcohol and I didn’t want to live any more.

“I tried to stop all these bad things that I was doing, and I couldn’t do it on my own and I knew that.

“I went upstairs into my room and I got down on my knees, and I was crying out to God for help.

“I remember being on that floor. I went down as a 400lb fat guy, but when I got up off that floor after praying for 20 minutes or something, I felt as if the weight of the world was lifted off my shoulders.

“I called to my wife and I said: ‘Paris, you know what, tomorrow morning the regain mission starts, I’m gonna become heavyweight champion of the world again’.

“This was after having three years out of the ring and totally abusing my body. I said to God ‘I’m very unhappy, if there’s any way to come back to boxing, please show me the way’.

The road back begins

“So I say to anybody who is down, anybody who is feeling depressed, anxious – give it all to God, ask God for help. Ask and you shall receive the Bible says”.

Now Fury is again the man who has everything – including happiness. He is world heavyweight champion again, fulfilled emotionally and spiritually. And with wife Paris expecting the birth of their sixth child.