The countdown to Oleksandr Usyk vs Anthony Joshua 2 officially began on Tuesday in Jeddah, Saudi Arabia.

The two fighters met face to face for the first time since their rematch was officially confirmed. They will meet once again with the IBF, WBA and WBO world heavyweight titles on the line in the Middle East on Saturday August 20 (live on DAZN).

You can watch their official press conference in full now by clicking on the video right below here: 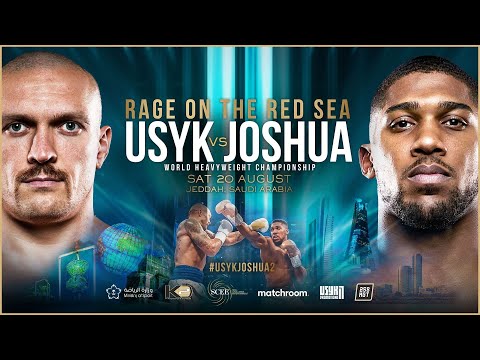 The big names of course had plenty to say, here are the best of the quotes:

“I am very happy to be here in Saudi Arabia. It is very pleasant for me and my team. We are doing what we have to do to achieve our goals. I have never made any loud or bright speeches. To become World Champion all I did was work hard in my training camp and gym. That’s what I am going to do until the day of the fight and my boxing will make me happy.”

“I just want to say god is good, all the time, even through tough times. I’d like to thank everyone for coming out today. Definitely the hunger is still there. As I always said from the get-go, stay hungry. Just keep the motivation high. Blips happen. Things happen in life but resilience, mental toughness and consistency will always prevail. We’re still on the road, we’re still on the road to Undisputed for sure. It’s just a little blip in the road but I’m focused on the target which is sitting over there (points to Usyk).

“I’m focused on the goal, god willing I’ll perform, and I’ll become three-time Heavyweight Champion of the World. With Andy Ruiz I think a lot of people can see before the fight things weren’t 100%. You’ve got to be strong, thick skinned; we take our loss like a man. When I win, I keep it moving and I thank everybody. When you lose, you have to stay humble as well in defeat. We kept it moving and I knew I could come back again and do what I have to do.

“The fight with Usyk, he bust my ass for some rounds. I have to take that defeat like a man as well. I hold myself accountable. I’m someone who can admit when I’m wrong and hold my head high when I’m right. The fight in September, he was right, and I was wrong. Simply, I have to reverse that role on August 20th. I don’t like to overcomplicate the situation because there’s simplicity in genius. Sometimes if you keep things simple you can achieve great things, so I’m just going to keep things simple, move forward and the date will soon come.

“I wish Team Usyk a successful training camp and safe travels wherever they go in the world. Same to my team, Robert has been great in the camp, my staff at the back there as well that have been helping me in my training camp. I wish all of us well. I wish you guys a safe few weeks and I can’t wait to see you all again in the stadium for a great night of Heavyweight Championship boxing.”

“First of all, thank you all for being here. Thanks for having us. I want to congratulate Usyk and his team for all of the success they had. They’re great people and a great team. I started coming to the UK in December, I’ve been coming back and forth to England to work with Anthony. I see a different Anthony now; the way he thinks and the way he talks. Everything he’s practising and everything he’s doing in the gym; I think he fought the wrong fight but that’s the past. That happened already. Usyk was the better man, congratulations to him, but come August 20 we’re going to do whatever it takes to win those titles back. I know he can do it.

“He’s the bigger man, he’s the stronger man, he’s got the reach advantage, so we’re going to take advantage of all that. Come that day, I think without a doubt we’re going to have a three-time Heavyweight Champion of the World. We’ve got to be prepared for everything. Usyk is a great fighter, he’s got skills, reflexes, accuracy – he’s got everything. I think Anthony has the tools to beat him. We just have to do the things in the gym.

“He wants to be champion again. Like I said before, I have no doubt that on August 20th he will be champion again. With the dedication that he has and the hard work that he puts in in the gym, it motivates me also to put more into the training camp and to come out with the win because I know how much he wants it. I want my first Heavyweight Champion of the World. I’ve had 14 World Champions, he will be my 15th, but he will be my first Heavyweight Champion of the World and that’s big for me too.”