Croatian heavyweight prospect Alen ‘The Savage’ Babic says world champion Tyson Fury is “a f***ing beast” and a man who “can’t be broken”.

Babic, who wowed hardcore UK fans with a brutal destruction of Shawndell Winters inside two rounds at Matchroom Fight Camp on August 22 to improve to 4-0, also says he would give the edge to Fury if and when he finally meets great rival Anthony Joshua in an eagerly-awaited unification showdown.

The 29-year-old told Pro Boxing Fans: “I like Tyson Fury, because his mental strength is through the roof. He got back from suicidal thoughts, from that knockdown by Wilder, from everything. The guy is a f***ing beast. He can’t be broken, because he was broken a million times. You can’t do nothing to a guy like that.

“Joshua had an easy, quiet way, he’s just the best at everything, and sometimes that’s not good. So I think I would give the edge to Tyson Fury. 55-45 to Tyson Fury.”

That win over Winters has brought Babic, who calls his ring persona ‘The Savage’, a legion of new admirers in the UK.

He said: “I’m happy that I got my message out. That I’m different and I’m old school. And the fans love it, obviously I hope UK loves it.

“I’m happy that showed myself in real ‘Savage’ mode. That is the way I’m always gonna fight. I wanna change the game, do something different. I wanna bring the 60s back in the ring.” 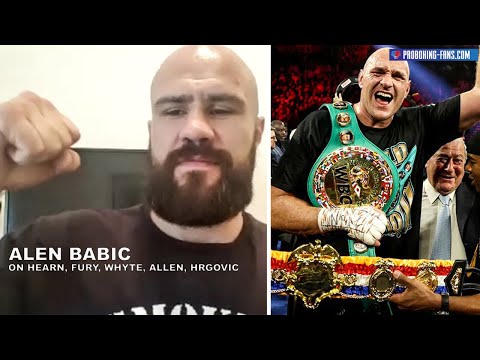 Babic says he idolised the great Joe Frazier growing up, explaining: “Joe Frazier is my number one. From his humble beginnings to his humility, he was such a humble guy and such a beast in the ring.

“And that’s who I am really, Alen is just a nice guy. I never curse, I never do stuff like that. I look kind of tough but I’m really soft. Then I have this savage inside of me that I just want to f***ing kill everybody. I like the contrast between the two people.

“I manage to separate myself into two different people. Alen is always shielded by ‘The Savage’.”

Babic’s goal in the near future is to earn himself a showdown with another Croatian heavyweight prospect in Filip Hrgovic (10-0).

He said: “He’s a silver spoon guy and I was broke a million times so it’s two opposites and I would really like that fight.”