Skip to content
Fury vs Joshua News Ward and Bradley: Too easy for Fury over AJ

Ward and Bradley: Too easy for Fury over AJ

ESPN Boxing analysts Andre Ward and Timothy Bradley Jr have added to the growing list of experts who believe Tyson Fury would dominate Anthony Joshua when they finally meet inside the ring.

A matchup between the two British world heavyweight champions would be the biggest fight in British boxing history, but the prospect is also getting experts in the United States excited too.

Also answering questions on the hottest topic around was renowned ESPN Deportes correspondent Bernardo Osuna. Here’s what they had to say…

ESPN experts on Fury vs Joshua

Andre Ward on Fury vs Joshua

“Anything can happen Tess – it’s the heavyweight division – but I just don’t see this Anthony Joshua, coming off the loss and even though he won the rematch against Andy Ruiz, he didn’t look dominant from the standpoint of being in control, physically imposing. He’s a physically imposing heavyweight, but he moved around like he was the smaller man and. That concerned me.

“The type of momentum that Tyson Fury has now, I don’t see anybody beating him. I think the fighter that has the best chance to beat Tyson Fury is Deontay Wilder with that big right hand. Wilder would have to land the shot and get Fury out of there.

“I’m on the same level playing field as Andre Ward – I don’t see anybody beating Tyson Fury. I don’t see Joshua doing it. I think the fight will be interesting in the first half. You gotta understand that Joshua is about 6ft 6ins, he’s a big guy, very athletic, but most of his work is at mid-range. We saw against Ruiz that he doesn’t like pressure, so after seeing Wilder get backed up by Tyson Fury, you gotta understand that Tyson Fury can back up Joshua. That’s all he has to do to beat Joshua.

“So I would pick Tyson Fury all day, seven days a week, twice on a Sunday, to beat Anthony Joshua.” 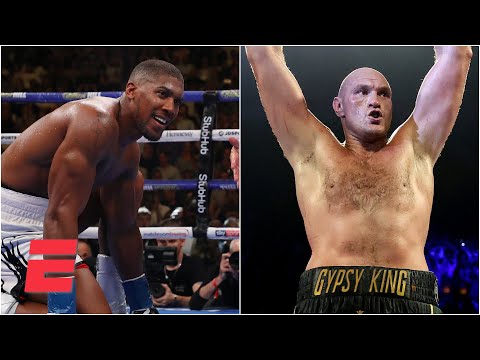 Bernardo Osuna on Fury vs Joshua

“The biggest questions with Anthony Joshua remain his chin as well as his conditioning. When you size these two guys up Fury is a better boxer than AJ is, and although I think the biggest advantage that Joshua has over Tyson Fury is his punching power, well he just got dropped twice by the biggest puncher in the heavyweight generation, which is Deontay Wilder. If he could take that punch, and then on the second fight go out and take the fight to him, I think the blueprint is there for another win for Tyson Fury against either Joshua or Wilder. Tyson Fury, right now, focused and fit, is a tough man to beat.”