Daniel Dubois has a professional record of 18-1 after bouncing back from that stunning defeat by Joe Joyce with three convincing victories en route to the WBA regular heavyweight title.

The young man from London – promoted by Frank Warren’s Queensberry Promotions – had burst onto the scene in terrific style with a 15-0 start to his paid career before that defeat by Joyce in November 2020. But that 1oth-round KO loss – together with a horrific eye injury he sustained in the process – brought out the doubters in force.

Dubois though showed there were no lasting effects from that defeat when he battered Dinu to a KO defeat inside two rounds in his return to the ring in June 2021. He then followed up by routing Joe Cusumano inside a round in Cleveland in August 2021.

Daniel then claimed his first world title – the WBA regular strap – by knocking out the hitherto unbeaten Trevor Bryan in Miami in June 2022. Now he hopes to step up to genuinely huge fights.

Dubois – born on September 6, 1997 and now 23 years old – clearly has time on his side. He has a fearsome array of weapons at his disposal, with a lovely left jab (it’s no surprise he is a big fan of Larry Holmes and Lennox Lewis) setting things up for powerful right hands, hooks and body shots. No wonder Dubois’ promoter Frank Warren retains such high hopes for him.

Dubois is now trained by Shane McGuigan, who headed up his corner for the first time in that demolition of Dinu. 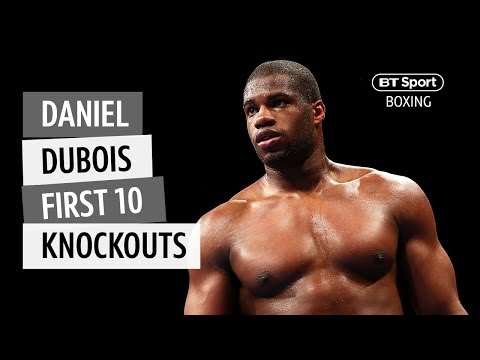 Daniel Dubois has fought 19 times as a professional – winning 18 and losing one. Seventeen of those victories have come inside the distance. Here is a full rundown of his fights and results to date:

Dubois stepped up to world title level (albeit the lesser known WBA regular strap) with a showdown vs the unbeaten Bryan in Miami. Daniel went in a heavy favourite with Bryan’s resume hardly inspiring huge respect, and the Londoner delivered the expected convincing victory. He was in control early but took his time before first rocking Bryan with a furious assault in Round 3. A brutal left hook then closed the show in the fourth.

Dubois made his Stateside debut on the undercard of the Jake Paul vs Tyron Woodley PPV show in Cleveland, and he did not disappoint. ‘Dynamite’ was expected to make short work of the overmatched Cusumano, and he did exactly that. It took Dubois less than a round to bludgeon Cusumano to defeat with a flurry of knockdowns.

Taking on Dinu was no soft option for Dubois on his return after that six-month layoff caused by the Joyce defeat. But he came through a stiff test with flying colours as he simply destroyed the Romanian to take the WBA interim heavyweight title. Daniel was on top from the first bell and closed the show in Round 2 when he ended a sustained flurry of shots with a peach of a right hand which sent Dinu to the canvas. He failed to beat the count, leaving Dubois to celebrate a successful return.

This was the first major test of Dubois as a professional, and it was a test he was to fail. Despite being a 1/4 betting favourite, he could not make a dent in Joyce, a man 12 years his senior and with a granite chin. ‘The Juggernaut’ boxed cleverly from distance and used his reach and left jab to gradually close the left eye of Dubois. The end came in the 10th when yet another jab to the eye saw Dubois fall to one knee as Ian John Lewis counted him out. It was a shocking defeat for Dubois, causing Carl Frampton – analysing the fight for BT Sport – to say he had “quit”. It was later revealed that Dubois had suffered a fractured eye socket during the defeat. One the line in Dubois vs Joyce were the British, Commonwealth and European heavyweight titles.

Dubois warmed up for the big showdown with Joe Joyce by blasting out the overmatched Dutchman Snijders inside two one-sided rounds. Snijders – who took the fight on just 10 days notice after original opponent Erik Pfeifer had been ruled out, came in 29lbs lighter than the man mountain Dubois (244lbs). And the 1/100 chance duly ended things in double-quick time. The first round saw Snijders on the canvas three times as ‘Dynamite’ got to work. And the 22-year-old from London closed the show in the second with a brutal left to the body.

Dubois improved his record to 14-0 with a stunning demolition of his Japanese opponent. ‘Dynamite’ was quick to establish his dominance in the opening session via a stiff jab with which he scored at will, and set up right hands which started to sap the endurance of Fujimoto. It was clear this wouldn’t be a long night for Dubois, and a left counter dropped Fujimoto to the seat of his pants early in the second, though he was able to continue after taking the count of eight. The KO when it arrived was a thing of beauty as Dubois blasted Fujimoto out with a picture-perfect right hand which brought the evening to a perfect conclusion.

Dubois claimed the vacant Commonwealth heavyweight title with a brutal demolition of the man from Ghana inside a round at the Royal Albert Hall. Two knockdowns were enough to end matters swiftly as Dubois again showed proper potential – the first courtesy of a right hand after fierce body shots with the left had dropped Tetteh’s guard. The second came from another vicious combination and this time Tetteh – who had looked nervous even before the opening bell – was in no condition to continue.

Dubois successfully came through the biggest test of his professional career so far, knocking out the previously unbeaten Gorman to claim the vacant British heavyweight crown. Many had expected Dubois to be really tested by Gorman but he was seriously impressive as he dominated from the start with that trademark left jab again a fearsome weapon in scoring at will and opening the way for that huge right hand. Gorman was down for the first time in round 3 as a blistering assault by Dubois finally put him on the deck as Gorman just could not withstand the barrage of shots coming his way. He survived only for a little while afterwards though as Dubois closed the show in Round 5 when another huge right put Gorman down again, this time for good. 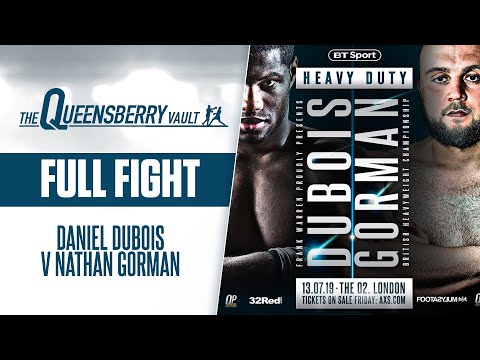 Another impressive night for ‘Dynamite’ who finished his Ghanaian opponent in the fourth after another systematic beatdown in his home city. Lartey though showed real cojones as he recovered from being clobbered with a beautiful uppercut in the third to trade furious blows with Dubois. Daniel though was on top again by the end of the third as he re-established the jab and started to work effectively behind it again. The coup de grace came in the fourth with just over a minute remaining as a beauty of a right hand put Lartey on the deck and he failed to beat the count.

Dubois elevated his perfect professional record to 10-0 with an effortless destruction of Romanian journeyman Cojanu at the Royal Albert Hall. ‘Dynamite’ backed his opponent onto the ropes late in the second session and unloaded with a fearsome flurry which eventually put Cojanu down. He attempted to rise to his feet but was unable to and referee Steve Gray waved the fight off.

Dubois went the distance for the first time as a professional as durable American Johnson was able to spike his guns to an extent on what was a night of education for young ‘Dynamite’.  He started fast as usual, having won all of his previous fights inside five rounds. But Johnson didn’t fall as easily as his previous opponents, and Dubois was forced to go to the scorecards for his latest victory. It was never in doubt though as referee Shaun Messer gave Johnson only a share of one round as he scored the 10-rounder 100-91 in favour of the still unbeaten Dubois.

Dubois claimed the English heavyweight title in just his eighth professional outing – one faster than world champion Anthony Joshua had – by stopping Little inside five rounds at the O2 Arena. Before the bout Little had promised to really test Dubois, but he didn’t really manage to deliver as ‘Dynamite’ was dominant throughout. That super left jab and punishing body shots really weakened Little and by the fifth he had nothing left as Terry O’Connor stepped in to wave it off after another Dubois assault.

Dubois registered his seventh professional victory in as many fights by stopping the previously unbeaten Jones in the third round at the York Hall. The youngster finally ended what was a messy affair by decking Jones with a right hand, prompting referee Bob Williams to stop the fight. It was at least another step on the learning curve for the aspiring Dubois.

Dubois improved to 6-0 by impressively disposing of Welshman Darch inside two rounds at the Copper Box. ‘Dynamite’ was quick to establish the trademark jab and by the end of the opening session Darch was bloodied and had already been on the floor once, taking a knee and then beating the count after being decked by a powerful chopping right from Dubois. Darch came out for the second willing to fight with fire, but it was a dangerous strategy and he was put on the seat of his pants three more times in quick succession – the third time signalling the end of the night’s proceedings.

Dubois produced a stoppage for the highlight reel with a stunning right hand that knocked Carter cold inside the first round at the Copper Box. Carter had already been down twice when Dubois landed flush with a magnificent shot 45 seconds into the fight that ended proceedings immediately.

The game but very undersized Barragan did well to survive the opening round after being decked by a big right hand just 15 seconds into the fight. But his night was never going to last long and so it proved in round 2 as a sickening body shot from ‘Dynamite’ left him writing in agony on the floor as he was counted out.

This one was scheduled for four rounds, but it lasted precisely 40 seconds as Dubois ended matters with the first significant punch he landed, knocking Howe to the canvas with a cracking right hand over the top. Howe was unable to beat the count and the impressive 19-year-old ‘Dynamite’ improved his professional record to 3-0.

Dubois took the first significant shot of his career – a right hand from the wide open and slugging Mendouo – in round 1 but it was a momentary inconvenience as he roared back to produce a blistering stoppage in the second. The speed and power of Dubois’ assault in R2 was a sight to behold as he left his opponent in no state to continue.

The eagerly-awaited professional debut of the highly-touted Dubois lasted less than 40 seconds as Kelly came out flinging wild punches but with no thought of avoiding what came back. He was caught by a left hook which put him on the deck, and he was unable to prove to the referee he was fit to continue.