In his darkest days after that December 2019 loss to Anthony Joshua, it was a call to P4P king ‘Canelo’ Alvarez which set Andy Ruiz Jr back on the right path.

Ruiz Jr had meekly handed back the IBF, WBA and WBO world heavyweight titles to Joshua on what was for him an awful night in Saudi Arabia. He had arrived in the Middle East weighing 283lbs – 15lbs heavier than for their first meeting. And in no shape to defend the belts he had won in such stunning fashion just six months earlier. 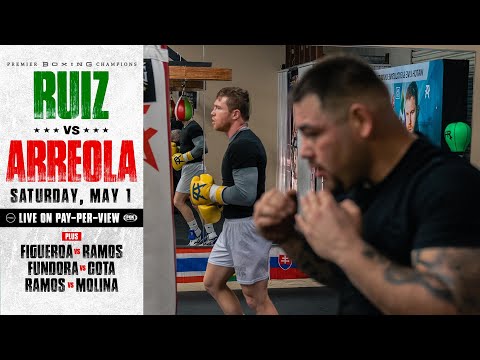 The 31-year-old from Imperial, California was so out of shape he struggled to throw his punches properly. Joshua, who had pushed for the immediate rematch, boxed smartly from the outside to win an easy decision.

That night wasn’t the end of the pain for Ruiz. He continued to pile on weight and reached 310lbs in the aftermath of the bout. It was only when he reached out to ‘Canelo’ that things started to change. He would subsequently join the Mexican superstar in the stable of training sensation Eddy Reynoso.

Several months on, and the transformation is stunning. Ruiz has his focus back, and he is in shape. Now walking around at 255lbs, he is ready to return to the ring against Chris Arreola in a FOX PPV in Carson, California on Saturday night.

“With Oscar Valdez and Ryan (Garcia) of course, there’s a lot of champions, a lot of people who are dedicated here so we’re all on the same track and we all want the same thing, and that’s to become champions and to build our own big legacy in the sport of boxing.”

More than anything, Ruiz is actively relishing the hard work and motivation that every day with Team Reynoso brings.

“We come here every single day and we train almost three times a day,” he explained.

“I’ve slimmed down, I was almost at 310lbs and now I’m at 255lbs and I feel super great like I never have before.”

As Ruiz readies for the big showdown with Arreola on Saturday night, and the world waits to see what the new Andy has to bring to the table, the last word for now goes to his brother Daniel.

“He’s looking amazing. It’s just a huge change since he left Manny Robles and came over here. A whole other mindset – it’s a champion mindset when you get here.”

Will the champion mindset enable Ruiz to become a world heavyweight champion again? Only time will tell, but for now the signs are very very promising.