Skip to content
Fury vs Joshua News ‘That fat kid?’ Ruiz and Arreola on 2006 sparring session

‘That fat kid?’ Ruiz and Arreola on 2006 sparring session

Chris Arreola and Andy Ruiz Jr have been on a collision course for 15 years, ever since a memorable sparring session which brought together two men with the same dream.

Arreola was a 25-year-old heavyweight contender when they first set eyes on each other, while Ruiz was a chubby 16-year-old. They both wanted to be the first Mexican heavyweight champion of the world.

As they prepare to top the bill on a FOX pay-per-view ($49.95) in Carson, California on Saturday night, the two men spoke to Premier Boxing Champions on YouTube to recount that memorable meeting.

Arreola meanwhile was unimpressed, shocked even, when he was told that he would be sparring Ruiz. “Him, that fat kid?” was his immediate thought. He wouldn’t hold that mindset for long though – once the action started he got a rude awakening.

“This motherf***er is throwing hands, he has hand speed. He moves in the ring so fluid. He was a very very good fighter and I’m like ‘holy s***.” 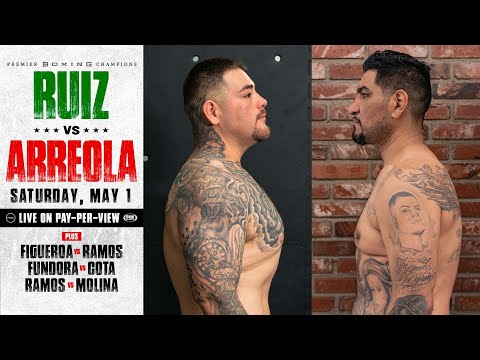 Arreola’s initial impression was confirmed when Ruiz showed he had cojones and desire as well as those blurring hands.

Chris explained: “We got into an exchange in the third or fourth round, and his Dad is like ‘chill chill’ and we stop. Andy is like ‘no, we’re sparring, we’re working, this is how we work.

“We went back at it again and that’s when I knew, like this kid was gonna be a heavyweight to be reckoned with in the future and if I’m still in the game, more than likely I’m gonna face this motherf***er. And sure enough, here we are.”

Ruiz and Arreola had same dream

Ruiz looks back at that session almost misty-eyed. They were men at different stages of their career. But on the same path, towards a goal Ruiz would reach in June 2019 when he dethroned Anthony Joshua at Madison Square Garden.

“When we first sparred, we both slugged it out. everybody was impressed, like ‘Who the hell is this kid? He’s fast’,” said Ruiz.

“Outside the ring we’re super friends, we’re close and all that. But inside the ring you know, it’s all business.”

Saturday night will see that inevitable path lead both men to the same professional ring at last. It promises to be a classic scrap. Arreola still has his dream to get that elusive heavyweight title. Ruiz knows what it feels like, and he wants it again.

UK fight fans can watch Ruiz vs Arreola on BoxNation on the Premier Sports platform on Saturday night,