Andy Ruiz Jr says he is ready to write a new chapter in his incredible boxing story as he prepares for his return to the ring in April.

Former world heavyweight king Ruiz Jr was a late stand-in and 30/1 underdog when he stunned Anthony Joshua at Madison Square Garden back in June 2019.

The Californian appeared to be badly out of shape when he lost a rematch to Joshua in December 2019. He has not fought since, but is now being trained by Eddy Reynoso – who also looks after P4P king ‘Canelo’ Alvarez and lightweight sensation Ryan Garcia.

Ruiz Jr appears to have a new-found focus – and body shape – and is due to return against Chris Arreola in a FOX PPV on April 24. He says fans are in for a treat, and a new Andy…

“At the end of the day, I’m working hard, man. And it’s gonna show for my next fight and all the other fights that I have coming up. I’m just ready, bro. A new Andy is coming soon, a new chapter. 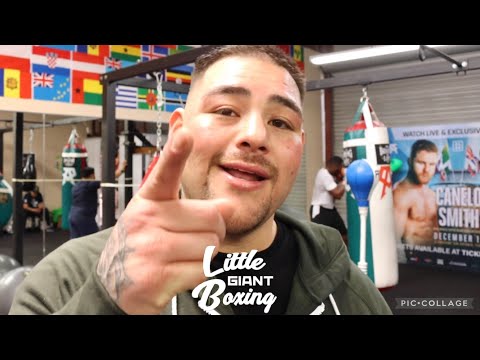 Joshua recently claimed that he was not himself when he suffered that devastating first professional defeat at the hands of Ruiz Jr. But Andy says he could say the same about their second fight.

“He can say whatever he wants, but the main thing is I won in a spectacular way. And in the second fight, what was his excuse? He didn’t really look that good. I was half way in shape and we still went the distance, you know?

“He didn’t hurt me. He probably cut me a little bit. But at the end of the day, everybody is going to have their own opinion.”