Ben Davison is pretty well placed to talk about Tyson Fury and Anthony Joshua ahead of their planned world heavyweight title unification showdown next year.

Davison is the trainer who masterminded Fury’s astonishing return to the ring after ballooning to 26 stone and suffering from mental health issues. He brought ‘The Gypsy King’ back from the wilderness to the very highest level as he drew with the unbeaten WBC king Deontay Wilder in their first fight in Los Angeles in December 2018.

Fury and Davison went their separate ways ahead of the rematch with Wilder, but Davison is still credited for doing an incredible job to get his fighter back on the road to world title glory.

This week, in the aftermath of the announcement of the Fury vs AJ double-header plan for 2021, Davison spoke to Kugan Cassius of IFL TV to give fascinating insights about both men, their skills and the way they have evolved in recent fights:

“From the very early part of his career, he was a big man boxing as a big man, used to box in a full guard, walking people down and being a 6ft 9ins monster of ‘insidefightingness’ as he would put it.

“Throughout his career, he worked with so many different coaches from amateurs all the way through to now, he’s always been so versatile.

“For me in that first fight (against Wilder), he didn’t go into that first fight with momentum at all. He come in off a 10-stone weight loss and two comeback fights, sparring sessions, tick-overs, that were all part of the process  – but he was still losing weight going into the first fight.

“Wilder was coming in with 40 knockouts and fantastic momentum. So Tyson had to get off to a good start, he also had to let be able to let Wilder know ‘I’m a big man too and a big man who can punch’ and at the end of that first round Tyson was able to do that and get some respect.

“But a huge part of that first fight gameplan was obviously, in truth I didn’t know how he was gonna do the rounds – he hadn’t boxed at that level for 12 rounds for three years, since Klitschko. So a lot of it was down to round management, when to work, when not to work. Being wary and economical of what was in the tank.

“He went into the Tom Schwarz fight – fantastic fight – then he went into the Otto Wallin fight. For me I feel like he went comeback, Wilder fight was on the up,  Schwarz he hit the up, Wallin his body needed a rest, he’d gone over the hill and needed a break, and I could see that all the way through the training camp.

“After that he had October, November and December off and went into training camp at the very very late part of December after Christmas. That rest was invaluable physically, which showed where he put his weight on, because he wasn’t supposed to come in that light against Otto Wallin.

“His mental strength is phenomenal, and I saw that in the first fight, and I knew that was the difference between the two of them. What had happened in the 12th round of that first fight was gonna have an impact on Wilder. I went over to Vegas to watch Wilder versus Ortiz, and I remember Wilder saying after the first fight, he called it: ‘I was overshooting my shots’.

“So I knew that rather than looking at what Tyson was doing to prevent his shots landing, it was ‘Oh, it was because I was overshooting my shots’. Not actually looking and assessing the situation and why.

“So I knew he was gonna try to be a little bit more patient, take his time and almost try to lull Tyson into a shot. I’ve got some texts on my phone after the Ortiz fight, where Tyson, I can’t remember exactly the wording, but basically saying: ‘I’m gonna put it on him from Round 1. He’s gonna try and take his time and I wanna put it on him from Round 1. Basically if he’s looking to  start slow, I’m gonna start fast.” 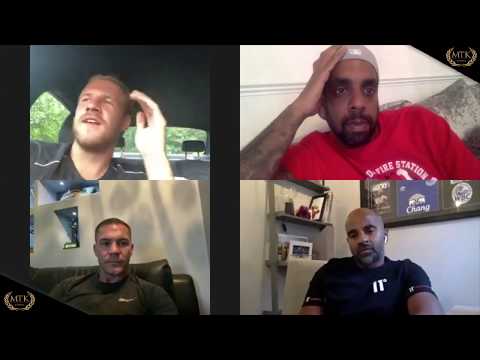 “It always seemed I was always very negative to Joshua, but I wasn’t, but what I saw that he was very one-dimensional. I’d describe his, I’d say previous style, a bit like two men, each with a gun, firing shots and whoever lands first, because big heavyweights that are exchanging in that manner, it’s who lands first. Because they can all hurt each other.

“From that to the second fight – and the thing was where you have to give credit – it was from one fight. And the amount of pressure that was on his shoulders going into that fight, to make those drastic changes in one camp, and to be able to look and go ‘Okay, I need to completely change what I’m doing,’ that takes tremendous balls, self-awareness – so many traits.

“The difference for me from the first fight to the second fight was obviously his mobility, his non-punching activity, he was a lot higher, a lot smarter with what he did. And people talk about boxing in a rhythm, but it doesn’t matter if you box in the same rhythm over and over and over, even if the rhythm looks fantastic, but if it’s the same rhythm all the time it becomes predictable. And that’s what he was doing before.

“But he was able to change his rhythm, be able to and punch and move, which is something that we’d never seen him do before. And he really showed another side to his game, which is something you have to have at the top level. If any top-level fighter is one-dimensional he’s gonna get found out against top-level fighters, I don’t care who you are.”