Skip to content
Fury vs Joshua News Carlos Takam: I’ll be a problem for Joe Joyce

Carlos Takam: I’ll be a problem for Joe Joyce

Carlos Takam has promised he will be “a problem” for undefeated heavyweight Joe Joyce when the pair meet in London on Saturday July 24.

The Frenchman (39-5-1) brings a wealth of experience to his eagerly-awaited clash with the 12-0 Joyce when they meet in a pivotal showdown for both men.

Pivotal night for Joyce and Takam

For Joyce, it is a chance to cement his status as the next mandatory challenger for the WBO world heavyweight title. For Takam, it is an opportunity to take that status and get himself back into the world title mix.

As Takam, arrived in the UK, he told Frank Warren’s Queensberry Promotions on YouTube: “I think is gonna be a big fight for him. For me, I don’t wanna say it’s a mall or easy fight. But I’m here because I’m ready and prepared. Joe Joyce, I’m ready for you, I’m a problem.” 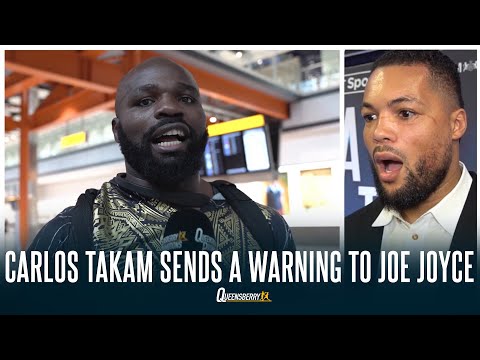 Joyce has been in hugely confident mood since the fight was announced, but his boasts cut very little ice with Takam.

The 40-year-old Takam has fought twice in the UK before, against Anthony Joshua in 2017 and Dereck Chisora in 2018.Both of those bouts resulted in defeat, but the veteran Frenchman did build something of a cult following in the process. He thinks he knows why.

“I like to go see them, speak with them, make a picture with them. Every time they text me on Instagram I reply to them directly. I think that’s why they love me.”

Joyce vs Takam will be screened live by BT Sport on Saturday July 24 and it will take place at the SSE Arena, Wembley.