The weigh-in for Dereck Chisora vs Joseph Parker is officially in the books and ‘Del Boy’ looked in tremendous shape when he got on the scales in Manchester on Friday afternoon.

Parker meanwhile came in at 241lbs (17st 3lbs) – just over a pound heavier than he was for that points victory over Junior Fa in the big domestic dust-up in Auckland in February. 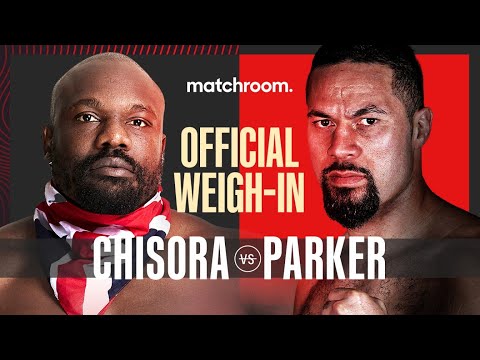 Saturday night’s bout will be screened live on Sky Sports Box Office pay-per-view in the UK (£19.95). DAZN meanwhile will stream the show in the United States and around 200 other countries around the world.

The 29-year-old Parker (28-2) will bid to advertise his claims for another world-title shot in his first fight since splitting with long-time trainer Kevin Barry. Kronk disciple Andy Lee will head up his corner on Saturday night.

The one-time WBO champion is ranked #3 by that particular sanctioning body going into Saturday’s scrap.

Chisora (32-10) meanwhile will present the New Zealander with a stern examination of his title credentials. The 37-year-old warhorse showed he remains as durable as ever in giving Usyk a run for his money. Most of ‘Del Boy’s’ defeats have come against the very best down the years.

Chisora vs Parker is the main event on a star-studded show which also includes Katie Taylor defending her world lightweight titles against Natasha Jonas. Dmitry Bivol meanwhile puts his WBA light-heavyweight strap on the line against Craig Richards.

Throw in Chris Eubank Jr vs Marcus Morrison and the second professional fight for Campbell Hatton (son of Ricky) and you have a pretty special night in prospect.

You can look back at the fighters weighing in for all of those fights right here – just click on the video link in this article and you’ll get all the latest from the Matchroom ‘bubble’.