Tyson Fury vs Anthony Joshua could well be the biggest fight in British boxing history, but it won’t carry anything like the same lustre in the United States according to boxing expert Dan Rafael.

Rafael, who recently left ESPN after a stellar career as its lead boxing writer, believes that while the all-British showdown would be a hit with hardcore boxing fans Stateside, it would not cross over into the mainstream.

Speaking to IFL TV, he explained: “Certainly among boxing fans it’s huge – if you ask any boxing fan, regardless of the participants’ nationalities, I don’t think there’s anybody that would say otherwise that it’s not the biggest boxing match that can be made in the sport today . Whether it resonates to the mainstream sports fan, who aren’t necessarily boxing followers, I don’t know about that.

“My viewpoint – anecdotal of course – is that Fury has a much bigger name in America than Joshua – largely because of the mass amount of promotion and push that he got over his three previous fights – the tune-up fights against Tom Schwarz and Wallin and then of course the second fight against Wilder that was a big pay-per-view fight that was just promoted to death over here.

“Joshua is not nearly the name that he is. He’s only had the one fight in America – and it got a fair amount of publicity and obviously had the big upset situation. But it was broadcast on DAZN – which has done a good job with their boxing – but is not in every household the way an ESPN is, doesn’t have that mainstream name to the general public.

“It’s a big fight but I think that here – particularly if the fight happens between Fury and Joshua – it probably won’t take place in America, it will take place either hopefully in the UK or some other exotic location where they are putting up a lot of money. So the United States would not be the location, therefore it would probably not air on TV or a streaming service in a timezone which is conducive to American viewing at its hight.

“So honestly, it’s huge for boxing fans, I don’t think it’s that big of a deal to the general sporting public in America. I’m not saying they don’t care about it – a lot of them don’t know about it.

“It’s huge pretty much everywhere except America to be honest, it seems to me. I can’t wait for it but I’m a hardcore boxing guy. It’s just not that big over here in my mind.” 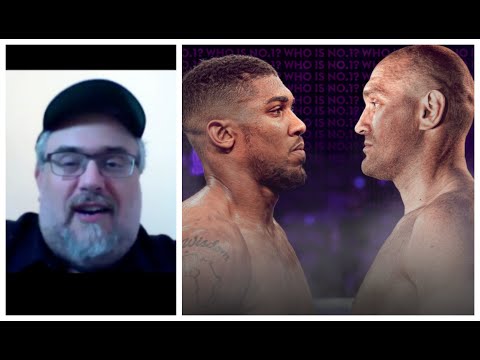 As well as the fact that Fury and Joshua both have interim fights (Fury against Deontay Wilder, Joshua against Kubrat Pulev), another factor which yet scupper an undisputed showdown is the political situation concerning governing bodies. The WBC is still saying at present that Fury must face his mandatory challenger Dillian Whyte after Wilder, while the WBO claims Joshua must take on his mandatory Oleksandr Usyk after meeting Pulev.

Rafael explained: “Dillian Whyte’s been sitting there as the number 1 guy in the WBC for, I don’t even know, there’s somebody that follows me on Twitter that Tweets at me all the time like how many days it’s been that he’s been the mandatory. It’s a long time, I know that.

“The way that I think Mauricio (Sulaiman, WBC president) would try to get around this, and I say this as somebody who knows Mauricio fairly well, that they would look to make a move to maybe give Fury the franchise champion title, which is something his co-promoter Top Rank has embraced. I mean they went and asked the WBC to give that designation to Lomachenko after they had created it for Canelo.

“So they have given away two franchise titles – one to Canelo, one to Lomachenko – and I think that they would totally embrace that for Tyson Fury. And if they did that, that would automatically make Dillian Whyte go from their interim champion to their WBC champion.

“Now Dillian Whyte probably would be happy to get the title, but I think he probably also would also like to fight the fight. Number one, there’s a lot of money and exposure in a fight like that, and also the opportunity to become the man in the weight class if you win the fight. You get a lot more money fighting a Tyson Fury for the WBC belt than if you just get handed the title in terms of them moving him up to the franchise champion.”

So that seems a potentially workable solution, but not so fast, for one very specific reason according to Rafael.

“You can’t win the title. So let’s say Lomachenko goes in the ring against Teofimo Lopez as the WBC’s franchise lightweight champion and Teofimo Lopez should win the fight, he doesn’t get the WBC franchise title. So the point is I guess it’s cool to have, but it’s a trophy title.

“My perspective – and I’ve said this to Mauricio, who obviously disagreed with me – I would say that the winner of a Fury vs Joshua fight, if Fury goes in as the franchise champion, the winner of the fight will be the lineal champion, will be the number one heavyweight in the world, will have the belts that Joshua has, but will not have the WBC title because that would be given to Whyte.

Not surprisingly then, while Rafael would love to see Fury vs Joshua, he believes there are way too many hurdles to overcome before that hope turns to genuine excitement.

“I’m not wishing against the fight by any means – like every boxing fan I’m super-excited and hope that it happens  – but I’ve also been around long enough to know that nobody should get their hopes up until a deal is done.

“I always remember when Richard Schaefer was working for Golden Boy, and I would talk to him about many of the big fights he was involved with – a lot of them were Mayweather fights, Oscar De La Hoya fights and many others. He would constantly – and it got to be a joke with us – he goes: ‘a signed deal is a done deal’. And he’s right about that.

“While I have no reason to believe that the Fury camp or the Joshua camp is in any way doing these things in bad faith, I think they’re doing them in good faith, I believe that both athletes very much want the fight – I’m a sceptic when it comes to these things.

“I’ve been burned too many times as a fan and had my heart strings pulled too many times to take it that seriously. I believe they have come to some agreement in terms of how they divvy up the money, but there are so many other things that have to take place before they actually step into the ring with each other. Not the least of which by the way is that each of them are going to have at least one interim fight – is it possible maybe even a second one, I don’t know.

“There’s all the issues about where it’s gonna take place. If there was no pandemic, you would say you could have the fight at Wembley Stadium or something like that – because they’d put 100,000 people in there, no problem. In this day and age though that’s not necessarily the best course of action. So there’s many things that need to be worked out between now and when they step into the ring. I hope it happens.