Daniel Dubois has opened up for the first time about that devastating KO defeat by Joe Joyce last November.

‘Dynamite’ was seen as the heavyweight division’s hottest prospect with a 15-0 professional record when he locked horns with Joyce at Church House in London. But despite being a heavy odds-on favourite he suffered a first loss at the hands of the 35-year-old former Olympian.

Dubois’ patented power didn’t appear to worry Joyce (now 12-0), and Joe’s jab speared home all night to do serious damage to Daniel’s left eye. In round 10 another left lead landed flush on the rapidly-closing eye and Dubois took a knee before being counted out.

Now, for the first time, Daniel has explained his thought process at that critical moment, and why he did what he did.

“I got on the knee, maybe inexperience, panicking and other stuff just happened. Just happened in that moment.

“When I got up and been counted out, was like ‘how did that happen’. It is what it is. I’ve gotta take it on board and put it behind me.” 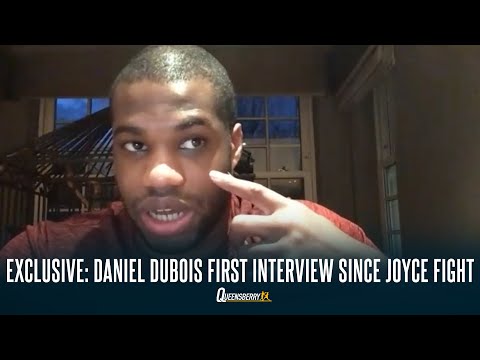 In the immediate aftermath of the defeat, Dubois came in for heavy criticism with some experts saying he’d quit. That criticism was tempered soon after when it was revealed he had suffered a fractured eye socket.

Daniel now is desperate to come back stronger, and make those critics eat their words.

“After all that, I’m not gonna let this stop me, hold me back. I’m gonna come forward and come through this and improve and work on what I need to work on.

“When I come back I wanna see them same people and get in the ring with them and show them how much of a quitter I am. When I come back hard, better than before, just come back solid really. Set things right, iron out my imperfections and clear the path really.”

As he looks back on that disastrous night, Dubois admits there are things he would do differently if he had the chance.

“Just get on with it a lot quicker, a lot sharper. I look back on it and I think yeah, there’s a number of things I could have done better from the beginning of the fight, my whole approach and attitude. But there we are.”

Dubois also revealed that he will now be changing trainers, with Mark Tibbs taking over from Martin Bowers in the crucial role moving forward.

He explained: “I want a fresh start and I feel like the experience that Mark and Jimmy Tibbs bring, that can really help me on my way back. If they can show me new things and depart some knowledge.

“They both go way back into boxing, their roots are strong. They’ve been at that top level before, fighting at world title level. Billy Joe Saunders and a few other guys, Dillian Whyte, he’s trained some really top fighters.

“I want to test myself and see if a fresh start will help. As a fighter you only get really one crack at the whip and I’ve got to go out there and do what’s best for me.”

Dubois paid tribute to the work Bowers put in to take him to this point, saying: “I also want to say Martin and Tony Bowers, they’ve done a tremendous job with me.

“It’s been a good three years or so, it’s been great from the beginning, they guided me, building up and everything else. I wanna say we’ve had a fantastic journey, it’s coming to an end. We go our separate ways with no hard feelings.”