DAZN chief: We won’t slow Fury vs Joshua down

The world wants to see Tyson Fury vs Anthony Joshua this summer, and broadcasting behemoth DAZN is no different according to its EVP Joe Markowski.

DAZN is just one of the broadcasters who will sit down at the table to talk streaming rights once a date and venue have been finalised. The superfight is expected to go down in late July or August, likely in the Middle East.

But Markowski says his team will be “creative and open-minded” in trying to make the fight become reality. And they will not slow it down. Welcome news for frustrated UK fight fans yearning for an official announcement that everything is finally done.

DAZN has streamed Joshua’s fights in the U.S. for the past two-plus years, though it does not have an exclusive agreement with him. A bout like this would also be perfect to grow the reach for its global platform.

Markowski told Boxing Social: “This fight’s been talked about for what, like two years now. A lot’s happened. We’ve got a fantastic relationship, a rolling relationship with AJ, obviously outside of the UK and Ireland where he’s with Sky – and done very well with them.

“As and when the broadcast element of those discussions start, which is not yet because they’re still trying to lock down obviously site fee. I think they’re making progress getting both sides lined up and the date, and then come back to the table and discuss broadasters.

“We’ve always been on record, not just for this fight but also on this fight, that we’re gonna be creative and open-minded and flexible. We’re not going to be the difficult partner that slows everything down. The world wants to see this fight – that goes way beyond core boxing fans.

“It’s gonna be the biggest sporting event in the UK despite the fact you’ve got the Euros and the Olympics potentially this year. It’s massive, particularly in the UK.

“So we’ll be flexible and open-minded – we’ll be a proactive seat at the table trying to make something happen. If that means we don’t get the rights in the U.S., we’ll see. Those conversations are all to come so I can’t comment on that yet.”

Which way now for Hearn?

Another big decision looming is the one facing Eddie Hearn about who will be his future UK platform partner. His contract with Sky expires this summer and now the talk is whether he’ll continue that long association. Or potentially put all his eggs in the DAZN basket. He signed a reported $1billion eight-year deal in 2018 to work with the platform in the U.S.

“That’s a question for Eddie, he’ll have a decision to make at some point,” said Markowski.

“What I would say UK for us as a market in our global market offering is performing very well. We’ve got a very solid fan base there.” 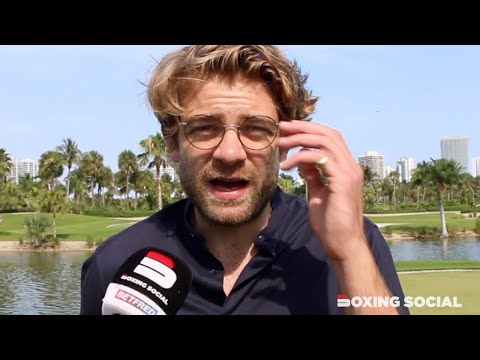 There is more big money coming into boxing in the U.S. right now – with Triller reportedly drawing 1.3million pay-per-view buys for its Jake Paul vs Ben Askren show in Atlanta on Saturday night. It also recently won a high-profile purse bid to show Teofimo Lopez vs George Kambosos.

Markowski is impressed by the entertainment aspect of what Triller is bringing to the table – potentially attracting a new breed of fan. He believes their entry is good for the sport, but he also says DAZN is at a very different stage of its evolution.

“We’ve had our own experience in boxing, we know how hard it is to crack into the market. It’s not a traditional sport, it does take a bit of noise to establish yourself. So I imagine that’s their strategy right now.

“We’re in a different stage of our journey, we’re very happy with our boxing programme and our boxing investments. We’ve navigated COVID I think particularly well as a broadcaster, more generally, but also in our relationships in boxing.

“We’ve been lucky to have fantastic partners who get the need to be flexible and open-minded and frankly creative when it comes to contractual solutions. Especially with Matchroom, we’ve navigated that particularly well and our relationship is in a fantastic place.”