Deontay Wilder has been tapping into the knowledge of George Foreman as he bids to bounce back from his first professional defeat by Tyson Fury.

Wilder was destroyed by ‘The Gypsy King’ inside seven rounds of their eagerly-awaited rematch at the MGM Grand Garden Arena in Las Vegas in February.

The ‘Bronze Bomber’ has exercised his contractual right to a third fight with Fury – a bout currently scheduled for early October. And now he’s been speaking to former two-time heavyweight champion Foreman as he looks for an edge in his bid to regain his WBC heavyweight title.

Wilder (now 42-1-1) , told the PBC podcast: “It was good talking to George. You know, George is one of the guys that I’ve been trying to get in touch for a good little bit. But everybody has a schedule.

“We had a great conversation. it was a real, real good conversation. We talked about a lot of things that went on in his career, you know, good and bad.

“A lot of you know, the different tricks of the trade that used to happen, and certain things that he saw in this fight, and a lot of knowledge that he applied to me.” 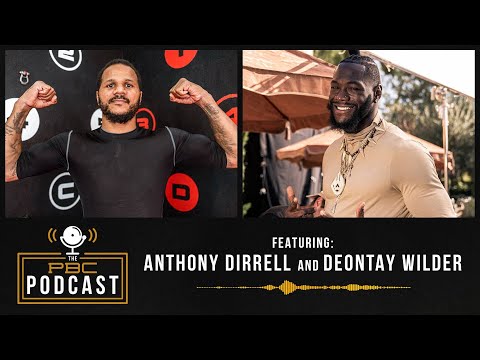 Wilder continued: “He was telling me how he wanted to show me some methods of strengthening certain parts of my body, and stuff like that. But he definitely dropped a couple of gems down for me and it was good to speak to him.

“I think I’m gonna, once everything clears up or whatever, I’m gonna go out and go see George, see him face to face, spend some time with him, and intake just you know, some of that good, old knowledge that he has up there.”

Wilder, who twice floored Fury en route to a draw in their first meeting in Los Angeles in December 2018, is still at a loss to explain his emphatic defeat second time round.

He said: “Maybe I’ll come out with some things later on as I get into camp, but I don’t wanna talk about it at this moment in time, I’m still reflecting on it and trying to figure some things out.

“It’s easy to understand what type of person Deontay Wilder was in that moment in time, even when I took off my mask and the things that I was doing. I’ve been in this sport a very long time. People automatically know how I am.