Former world heavyweight champion Deontay Wilder has broken his silence following the death of George Floyd in police custody in Minneapolis, pleading powerfully: “Why y’all kill our brothers and sisters?”.

Floyd’s death, after video footage showed a police offer kneeling on his neck for several minutes, triggered large-scale protests and riots across the United States, and a ‘Tuesday blackout’ on the internet when many outlets ceased operating – including the boxing bible Ring magazine.

Wilder is currently preparing for a third fight against WBC king Tyson Fury later this year – with Bob Arum revealing earlier this week that both Macau and Australia are in the running to host the fight if crowds are not allowed back into arenas in the United States by November or December.

But the ‘Bronze Bomber’ took time out from his training schedule to unleash an an impassioned poem which has been aired on IFL TV among other outlets. Wilder – pictured walking through woods Stateside – gave the following powerful message:

“As if all 400 years of slavery wasn’t enough. From from womb as a black man we was born to be tough. 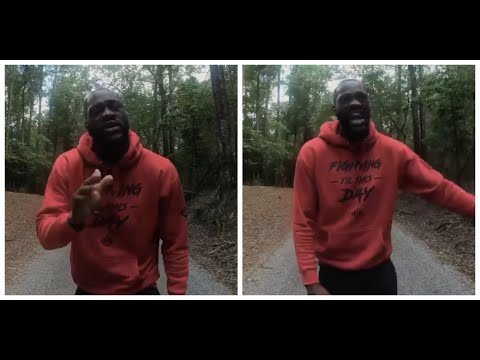 “Lynched, whipped, burned was the thing that had passed, but to this day – jailed, raped, gunned – how long will it last?

“As if Malcolm X and MLK wasn’t a must. As Eric Garner, Breonna Taylor, Trayvon Martin all died from just being us!

“Fighting for Ahmaud Arbery and all of the others. Tell me why y’all killing our brothers and sisters

“To this day, I don’t remember a time when none of my people did anything other to you people, other than work hard and try to be equal.

“Justice in peace for George Floyd and all the others. May they soul rest in peace. We will breathe.”