Skip to content
Fury vs Joshua News Dillian Whyte: I know what I need to beat Povetkin

Dillian Whyte: I know what I need to beat Povetkin

Dillian Whyte says he knows exactly what he needs to do to gain revenge over Alexander Povetkin in their rematch on November 21.

Whyte (27-2) lost his status as mandatory contender for Tyson Fury’s WBC heavyweight title when he was stopped by the Russian 41-year-old at Matchroom Fight Camp on August 22.

‘The Body Snatcher’ looked set for a signature victory when he dropped Povetkin (36-2-1) twice in round four, only for the former WBA champion to close the show with a stunning left uppercut a round later.

Some critics have said Whyte is rushing the rematch after suffering such a heavy stoppage, but he has rubbished that talk.

“I’m world level, why am I gonna come back at a lesser level?” he told Sky Sports Boxing.

“It was a close fight, a fight I was dominating. It’s a fight I can believe I can win, I just need to make some tiny adjustments. So why not go straight back in.

“I already knew what I did wrong, in the post-fight interview, I said basically what was wrong and what happened. I didn’t need to watch it too much or dwell on it or get depressed about it.

“It’s heavyweight boxing, I was dominating the fight and Povetkin landed probably the best punch of his career. Tough guy, experienced guy, he’s probably one of the most technical fighters I’ve ever fought.

“I made a mistake and obviously it’s heavyweight boxing, I almost had him out of there twice and then he landed a punch like that. I just took it for what it is, see the mistakes I made, and now we just move on and improve and come back and beat him.” 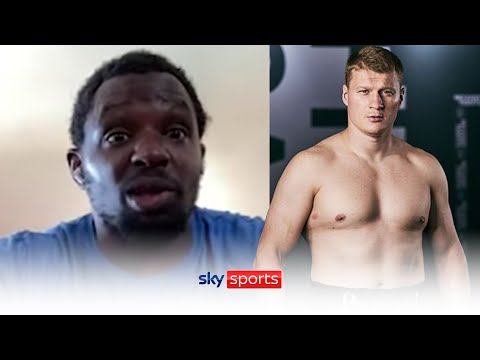 Whyte says the fact he was so much on top in the first four rounds means he didn’t struggle to come to terms with the defeat, and says it’s yet another learning curve for him.

“It wasn’t difficult at all (to get over) because it wasn’t a fight where I got a sustained beating for five rounds and I was down on the scorecards, or getting outclassed. I just got caught with a punch – he set it up. He used his experience and he set up the punch and he landed the punch, and I got caught.

“I had seven amateur fights and 29 professional fights. I’m still learning and figuring things out, still adjusting to things. One of my strengths is adjusting during fights – this time I never had chance to adjust.

“I’ve watched it back, re-evaluate, I see the little adjustments I need to make. And to be honest, now I know exactly what I need to do.”

Whyte has endured many setbacks on the road to being a world-level heavyweight, and he says this is just the latest opportunity to prove the doubters wrong.

Povetkin vs Whyte 2, like the first meeting, will be a pay-per-view affair on Sky Sports Box Office. A venue has yet to be confirmed due to the issues caused by the ongoing COVID-19 pandemic.