Joyce out to stun Dubois and beat the odds

Joe Joyce is happy the odds appear to be stacked against him ahead of his domestic heavyweight blockbuster against Daniel Dubois on November 28.

Joyce (11-0) and Dubois (15-0) are both on the cusp of stepping up to world level ahead of this eagerly-awaited matchup (live on BT Sport 1 HD).

The 23-year-old Dubois has a huge reputation after destroying his opposition so far in the paid ranks. He is a 1/4 favourite with UK bookmakers.

Joyce meanwhile is a 3/1 underdog, but he says being the underdog will have its benefits on Saturday week.

Pressure all on Dubois – Joyce

“I am not under any pressure because, according to the bookies, Daniel has already won,” said Joyce.

“He has made a big name for himself and he has got the pressure to deliver.

“I don’t know why, but it is okay because it will be better when I beat him because I will take his scalp, how he has been built and take it further.”

Age is just a number for ‘Juggernaut’

At the age of 35 time would appear to be against Joyce as he strives for a world-title shot. But he says the clock doesn’t have that many miles on it.

“I don’t feel that old because I only started in the game at the age he is now, which is 23. I feel like I haven’t been in the sport that long and that I have quite a few years ahead of me. 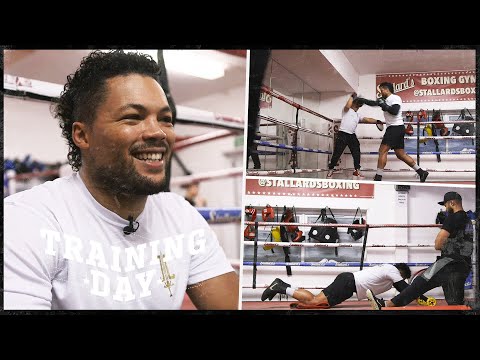 “But, yeah, this is a big fight and it is a big ladder to the top or a snake where I would have to rebuild. So the loser will have to rebuild a little bit and Daniel has got time more on his side because he is a young pup who would definitely be able to come back.

“I’d be able to come back too, but I don’t plan to do that. This is my chance to show what I am made of and to progress to the next stage and get a shot to become heavyweight champion.

“That is the route I am going. My aim before was to get to the Olympics and win a medal, so I completed that, although it was meant to be the gold medal and that didn’t happen. As a professional I want to be world champion and this is the route I need to go down and Dubois is standing in my way right now.”