Joe Joyce says Daniel Dubois made “the smart move” by thinking of his long-term career as he lost their huge fight by knockout last November.

‘Dynamite’ took a knee during Round 10 and stayed down for the count, having suffered a fractured eye socket as a result of Joyce’s spearing jab landing consistently all night.

Some experts claimed Dubois had quit immediately after the bout, but there was much more understanding when the medical reports came through in the following days.

Dubois right to stay down

Joyce (now 12-0) though says Dubois (now 15-1) made the right choice, thinking of his long-term career rather than just one fight.

He told BT Sport Boxing: “It was probably a good fight for him to learn from. You can’t just rely on the heaviness of your hands or your power. There’s more to fights and different fighters.

“Sometimes you might not be able to hit the person. Like with Usyk, would you be able to hit him? He’s on his bike, on his feet, southpaw, awkward. You’ve got to be able to have a wide spectrum of being able to adapt to different situations. 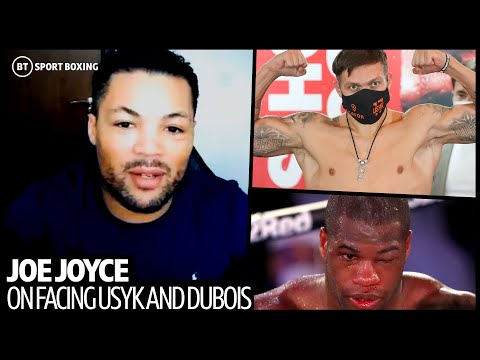 “You have to have a balance, find the right time to throw those big power shots.

“I just thought he (Dubois) made the smart move by ending it there (in Round 10). Some people were saying it was early on that he received that eye injury and he kind of weathered the storm and carried on.

“But definitely he saved his career, because they said one more shot like that he wouldn’t be able to see, damage beyond repair and him not be able to box again. He lived to fight another day. Even if he’d carried on, there’s slim chance of beating me. I knew then there was nothing he could do to beat me from there.”

The victory for Joyce, who had gone in as a 3/1 betting underdog, was a signature one for ‘The Juggernaut’ as a pro.

“I got my big win, stopping him with the jab. Silenced a lot of haters and the doubters and made new fans. It’s all good and it sets me up nicely for huge fights.”

Next up for Joe, now ranked #2 by the WBO, is a huge showdown with mandatory challenger Oleksandr Usyk. Joyce is expected to meet the former cruiserweight king in April. The winner is then expected to get a title shot of the winner of Tyson Fury vs Anthony Joshua.

Usyk next for Joyce

Joyce said: “It’s going as planned, so it seems. It’s looking like April, and negotiations seem to be going well. It’s almost confirmed.”

Joyce and Usyk met some eight years ago before Joe turned professional, and the Londoner dropped a convincing decision. But he believes things will be very different this time round.

“He’s (Usyk) bulked up in size a bit and lost a bit of speed. So I kind of caught up with him, and I hope to take over him in this next fight.”