The 23-year-old Londonder (now 16-1 with 15 wins inside distance) had suffered a first professional defeat at the hands of fellow unbeaten prospect Joyce last November, suffering a horrific eye injury in the process.

But after spending six months recovering that, he came back in style to destroy Dinu inside two rounds at the Telford International Centre on Saturday night.

Dubois too sharp for Dinu

Dubois looked really sharp after that long layoff, and his punches carried pop and speed. Dinu looked overmatched right from the first bell as ‘Dynamite’ looked to prove wrong the critics who wrote him off after that defeat by Joyce.

The opening session saw Daniel spend the first 90 seconds establishing control with a spearing left jab, before starting to mix in power shots – including that trademark chopping right hand and some powerful body shots.

That was as good as things got for Dinu as Dubois stepped up the pace to close the show in the very next round.

A sustained flurry inside the first 20 seconds of the second ended with a perfect right hand which decked Dinu, and the Romanian was unable to beat the count. 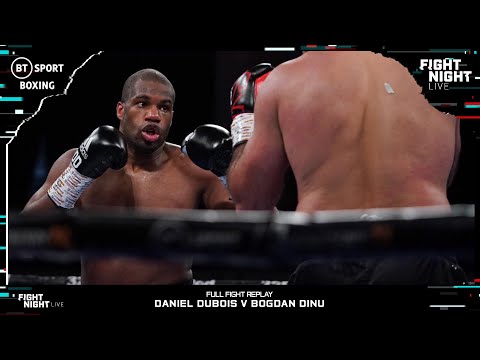 While a Dubois victory was expected, it was good to see no lasting scars from that defeat by Joyce as he produced an impressive performance. It was also an excellent start under new trainer Shane McGuigan despite the pair only having a short time together to prepare for this assignment.

Daniel was also only the third man to defeat Dinu (now 20-3) and he did so quicker than previous conquerors Jarrell ‘Big Baby’ Miller and Kubrat Pulev.

Now we await stiffer tests for Daniel as he moves up in class towards a potential world-title shot. Afterwards ‘Dynamite’ literally could not stop smiling – clearly relieved to prove that he remains as good as ever despite that defeat by Joyce.

It’s been a rough ride – Dubois

He told BT Sport Boxing: “It’s been a rough ride, and I’m glad to be back. There was little thoughts going through my head but I listened to Shane (McGuigan), stuck to my instructions and you saw what happened. It’s great. My sister just qualified for the Olympics and I’m glad I’m back. I picked up a belt as well. 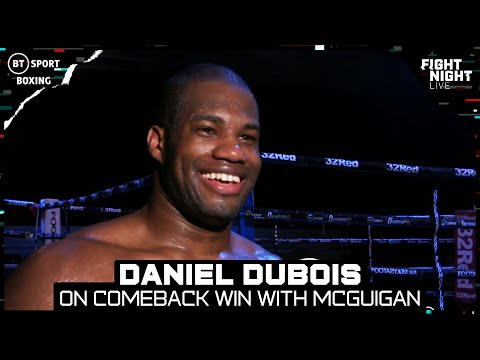 “I wanna to get back in the mix, taking things easy with Shane and learning new things in the gym. We’re gonna get there, man.

McGuigan meanwhile said: “He’s only 23, he’s young, he’s obviously suffered a little loss, but he needs to go back, rebuild and I think we did that. It was a fantastic performance, we didn’t have long. Give us six months, a year and you’ll see the best of him.”

Shane also talked about the formidable physical tools Dubois has, and says the most important thing of all might not be those powerful hands.

“How good his legs were, how good his distance control was. He’s got fantastic legs, he just needs to use them a little bit more. Speed comes from the ground up, sometimes he paws his shots out. But the more he uses his feet, the more he punches with his legs, the more speed and more devastation you’re gonna see from Daniel Dubois.

“Give us six months, give us a year, he’s gonna be knocking on the doors with the big boys – trust me.”