Daniel Dubois vs Joe Joyce is a domestic heavyweight blockbuster which has fight fans salivating ahead of the big showdown on Saturday night, and the pre-fight analysis has experts split.

These two unbeaten prospects will meet in a shuddering collision at London’s historic Church House with the carrot of a future world-title shot likely at stake.

There is nobody better to assess this cracking clash than trainer Ben Davison, who masterminded Tyson Fury’s epic comeback from a near three-year ring absence. He joined BT Sport, who will screen the bout in the UK, to break it down technically.

“It is a mouthwatering clash, as you know. Sometimes it’s my job to be technical and analytical but sometimes I like to just sit back and enjoy it. And this is certainly gonna be one of them, so I’m glad to be a fan for this one.”

“He’s obviously a real physical presence. With that physicality, he’s able to dictate right away from the get-go. In the (Nathan) Gorman fight he made his physical presence known and it was too much for Gorman to handle.

“He has a fantastic jab, fundamentally sound. He’s a real threat. He’s a real physical presence, emotionally he seems extremely mature and just focused on his job at hand. And it was just a real real tough one for Gorman, who is a very good fighter. 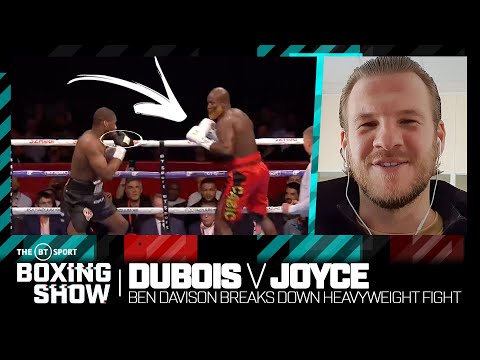 “With the Gorman fight he was smart about his approach, he took his time and was in charge of when the exchanges happened. But in the (Richard) Lartey fight, emotion overruled, he got into exchanges maybe at the wrong times, with someone that was willing to fight back. And that’s something we know, Joe Joyce will be willing to fire back.

“Those are the questions that people are interested in seeing being answered. How will he cope when someone’s firing back? Here (against Lartey) he lost his shape. If that’s Joe Joyce exchanging back, it could end up a different scenario.”

“For me, Joe’s got to be the one that at some point sets the pace in the fight. Makes Dubois fight at a pace that he is uncomfortable at.

“Joe Joyce is known for his phenomenal engine, but if you try to set a pace too early and you’re involved in too many exchanges and you’re letting too many shots go, you will be there to get hit.

“And in the (Bryant) Jennings fight, albeit a body shot, we saw him get hit early on. And if that’s Dubois, and that’s a chin shot early on, then it can be all over because he’s phenomenally heavy-handed.

“I think if he comes out looking for exchanges too early, it’s a real real risky one. But I think if he can maintain and be in the fight over the first few rounds and then try to set a pace that Dubois is uncomfortable with, he can ask those questions that people are looking to be answered of Dubois.”

Dubois vs Joyce: The big questions

“How does he (Dubois) deal with it when somebody is firing back? When somebody can be the dictator against him, when he’s in uncomfortable situations in the second half of a fight. When he’s not having it all his own way.

“Same with Joe, he’s known to be a phenomenal athlete, a monster, set a ridiculous pace. But can he do that when somebody heavy-handed is in front of him. We know he’s got a phenomenal chin, how good is his chin?

“So there’s so many questions that we’re looking to see answered and the intriguing thing is all the questions over each fighter, these are the styles to ask those questions. And that’s why it’s just a mouthwatering clash.”