Skip to content
Fury vs Joshua News Dubois vs Joyce odds: Pressure is all on Daniel

Dubois vs Joyce odds: Pressure is all on Daniel

Joe Joyce is surprised he’s such a big underdog for his planned October 24 showdown with fellow Brit Daniel Dubois – but says all the pressure is on his highly-touted opponent.

Both men may be unbeaten, but it’s the 22-year-old Dubois (14-0 with 13KOs) who is seen by many as the very future of a stacked heavyweight division and potentially the next great British star after the likes of Tyson Fury, Anthony Joshua and Dillian Whyte.

His exciting style and sensational highlight reel have the purists salivating, but the 34-year-old Joyce (10-9 with nine inside distance) has reached this big bout via a very different route and a long and storied amateur career.

The bookmakers see Dubois – known as ‘Dynamite’ – a strong favourite at as short as 1/5 in the betting, while Joyce is a best-priced 10/3 shot.

While surprised by that gulf in odds, Joyce did find a positive in there, saying: “I’m the underdog so I’ve got nothing to worry about. Because I’m supposedly gonna lose so I’ve got no pressure while Daniel has got pressure and big boots to fill.”

Dubois meanwhile claims he doesn’t care about what the betting says, explaining: “I prefer to do the fighting and let my performance speak for myself. I don’t look at numbers, I know what I can do. I go out there every fight confident, ready to fight, ready to rumble.” 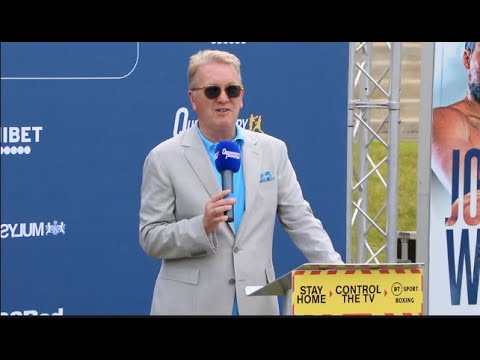 The route to Dubois vs Joyce really hots up in the next six weeks with both men having interim fights against tough German opponents.

This Saturday (July 25) Joyce meets Michael Wallisch (20-3 with 13 inside) while Dubois faces the unbeaten Erik Pfeifer (7-0 with 5 inside) on Saturday August 29. Both fights will take place behind closed doors at the BT Sport Studios in Straford, London and will be aired live on BT Sport.

Assuming both come through unscathed they will then meet at London’s O2 Arena on Saturday October 24 – hopefully with a huge sellout crowd in attendance.

Joyce for one can’t wait for that dream scenario, saying: “It’s the biggest British fight going and that’s why I wanted to get involved with it. Dubois has been built very well by Frank Waren here, so it’s gonna capture the boxing imagination and it’s gonna be one hell of a fight.”

While Joyce knows he has a tough night against Wallisch this weekend, he admits to being surprised that Dubois is risking that October 24 dream match by facing Pfeifer on August 29.

“I was quite surprised when I saw who he was gonna fight because Erik Pfeifer is no joke,” he said.

Warren – who promotes both men via his Queensberry Promotions – is not surprisedly excited by the potential for what might go down come October 24, but knows there is hard work and some serous hurdles to overcome before that.

“It’s a massive journey for both of them, it’s a moment in time – it’s happened through unusual circumstances,” he said.

“Who’d have thought they’d be cheering each other on. That’s what’s gonna happen.”