The wait is almost over as the final countdown reaches a crescendo ahead of the massive Daniel Dubois vs Joe Joyce showdown on Saturday night, and you can watch their final press conference here.

Britain’s two aspiring heavyweight prospects clash head on inside London’s historic Church House, Westminster. And ahead of the big clash, they met the media for the final time on Thursday. 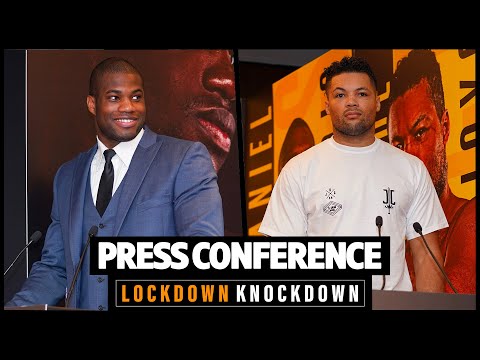 The stakes are high with the winner surely being on target for a potential world-title shot in 2021.

World-title shot could await winner in 2021

The 23-year-old Dubois (15-0) is already ranked number 2 by the WBO, behind only mandatory challenger Oleksandr Usyk. The 35-year-old Joyce (11-0) meanwhile would take that spot should he upset the odds.

Anthony Joshua currently holds the WBO belt but could potentially vacate the title to chase a unification clash with Tyson Fury instead.

That would potentially leave Usyk to face the winner of Dubois vs Joyce for the vacant strap.

The bookmakers have Dubois a strong favourite at 1/4, with Joyce a 3/1 outsider.

‘The Juggernaut’ says he feels ‘insulted’ by that and despited the odds as ‘crazy’. Dubois though comes in with a stellar reputation on the back of an awesome professional CV so far.

Joyce brings experience to the table

Joyce, 12 years older than his opponent, brings significant experience to the table though. He had a superb amateur career which included an Olympic super-heavyweight silver medal in Rio in 2016. He found only French prospect Tony Yoka too good there.

Saturday’s fight will be screened live by BT Sport 1 HD. Much to the delight of UK fight fans, the bout is not pay-per-view and will cost no extra to existing BT Sport subscribers.

The weigh-in for Dubois vs Joyce will take place in London on Friday afternoon, just over 24 hours. ahead of the big fight itself.

Joshua must decide whether he will vacate the WBO belt once he has met Bulgarian Kubrat Pulev in London on Saturday December 12.