Joe Joyce vs Daniel Dubois is a mouthwatering matchup and both men looked in peak condition as the weights were announced for their massive heavyweight showdown in London on Saturday night.

The pair will locks horns in historic Church House, Westminster with a potential world title shot in 2021 on the line.

Joyce in top trim for biggest test of all

Joyce (11-0 with 10 inside distance) had looked distinctly flabby when he tipped the scales at 270lbs (19st 4lbs) for his last outing. That was an easy demolition of German Michael Wallisch in July. But at Friday’s weigh-in he came in at a trim-looking 258lbs 14ozs (18st 6lbs 14ozs). 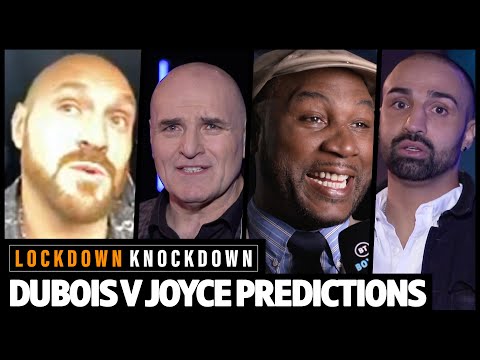 That is a stone heavier than the awesome physical specimen that is Dubois (15-0 with 14 inside). ‘Dynamite came in at 244lbs (17st 6lbs) – exactly the same as for his crushing defeat of overmatched Dutchman Ricardo Snijders in August.

Saturday night’s fight will air live on BT Sport 1 HD, and the winner will be lined up for a potential shot at the WBO world heavyweight title in 2021.

Dubois is currently ranked number 2 by the WBO, behind mandatory contender Oleksandr Usyk. If current champion Anthony Joshua vacates the title to chase a massive clash with Tyson Fury, then the Dubois vs Joyce winner will likely face Usyk for the vacant strap.

The bookmakers favour Dubois strongly with the 23-year-old a 1/4 favourite generally. The 35-year-old Joyce meanwhile is a 3/1 underdog – something he says is ‘crazy’ and feels ‘insulted’ by.

There is one prevailing narrative among many of the experts airing a view about Saturday’s massive collision. That either Dubois will blast out Joe early with his fearsome power. Or Joe will wear down the youngster should he survive the first half of the bout.

Joyce has a granite chin and relentless style. Dubois possesses terrifying knockout power. It literally is the irresistible force meets the immovable object. Something has to give, and in a few short hours we will find out what. It promises to be something special.