Daniel Dubois warmed up for his big showdown against Joe Joyce later this year by stopping Ricardo Snijders inside two rounds on Saturday night.

‘Dynamite’ is seen by many as the future of the heavyweight division and the natural successor to fellow Brits Tyson Fury and Anthony Joshua.

And it was again easy to see why, as with WBC, Ring magazine and lineal world champion Fury looking on from ringside, he blew away his overmatched Dutch stand-in opponent in trademark fashion behind closed doors at BT Sport Studios in Stratford, London.

The 22-year-old from London improved his professional record to 15-0 (14 inside distance) and is now on course for that intriguing showdown with the unbeaten Joyce (11-0 with 10 inside) at the O2 Arena on Saturday October 24 (live on BT Sport Box Office). 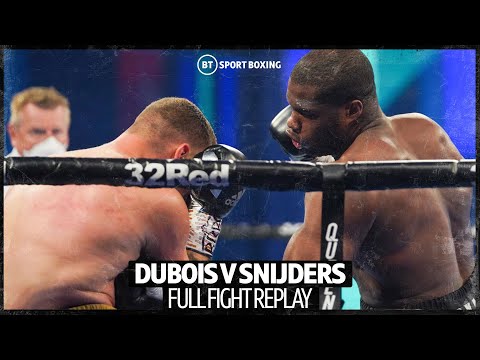 Dubois was having his first fight since a victory over Kyotaro Fujimoto last December, and was a prohibitive 1/100 with the bookmakers to prevail. He showed no real signs of ring rust as he made short work of Snijders (now 18-2) – who had replaced German Erik Pfeifer with just 10 days notice.

Dubois (244lbs) came in two stones heavier than his opponent Snijders (215lbs), and the gap showed as ‘Dynamite’ quickly set about delivering the fearsome blows he has become famed for.

He racked up three knockdowns in the opening round with the Dutchman woefully outclassed, and closed the show in the second with a brutal left to the body to maintain his unbeaten record and set up the showdown with Joyce later this year.

Afterwards Dubois told BT Sport: “I’m just getting warmed up. I’m just really excited to be out there again and hopefully next time we’ll have a proper fighter in there with me.”