Eddie Hearn is “really confident” that Anthony Joshua and Tyson Fury will meet in 2021, and doesn’t see Deontay Wilder getting in the way of their megafight.

Wilder currently stands between Fury and an all-British heavyweight unification showdown against AJ when the pair meet for a third time – likely in the fourth quarter of this year.

And while there has also been talk of the ‘Bronze Bomber’ stepping aside now to then face the winner of AJ against Fury, Hearn says that is not something his Matchroom operation (which promotes Joshua) wants.

For the Essex-based promoter, all roads lead to AJ/Fury and he wants no obstacles or distractions in the way with the potential of not one but two fights between the pair in 2021.

Eddie Hearn on Joshua vs Fury

Hearn told IFL TV: “I think what this has shown us is you have take opportunities when they are there. I’m pretty sure Tyson Fury is thinking ‘I need to make sure I get these AJ fights because that’s the defining fight of my career, financially that’s gonna set up many generations of my family’.

“And I know from AJ’s side, he is desperate to fight Tyson Fury so I think we know that Fury has gotta fight Wilder and AJ is gonna fight Pulev and we know now that Wilder won’t step aside so there’s point discussing that fight for this year. But we’ve just got to get those fights out of the way and also start negotiations, discussions have begun – I’m not saying negotiations have.

“Everybody is on the same page to make those fights for 2021 – two fights, simple – and I’m really confident you’ll get it.”

Eddie Hearn on Wilder stepping aside

Hearn re-iterated that contrary to those recent rumours, Wilder will not be stepping aside. And he also explained the reasons why that wouldn’t make sense.

“I think Bob Arum said it in an interview at the weekend where he said ‘look I don’t know where this number has come from’. There’s no discussions for him to step aside, he (Wilder) has said in interviews ‘I’m not stepping aside’. And with everything that’s happening in terms of the uncertainty over the future of the world let alone boxing, he’s not gonna want to step aside.”

Hearn added that he feels having Wilder step aside now would just create a bigger problem for Joshua and Fury down the road.

“And we don’t want to also enter in a deal where we say ‘oh when we beat Tyson Fury we have to face Deontay Wilder and he has to get 40 percent’,” he said.

“Deontay Wilder is out, he’s done, he’s just a voluntary challenger. So we want a clean slate where we can go into a deal, a one-fight deal with Tyson or a two-fight deal. But when AJ beats Tyson Fury, no we don’t want an obligation to fight Deontay Wilder – what’s he got to do with it? He’s done, he’s beaten, he’s just been knocked out. So if he beats Tyson Fury, we want to fight Deontay Wilder. But if he doesn’t, he’s just back in the rankings, he’s not coming into a fight with the undisputed champion.

“So in that respect it’s a lot easier for us to just have a clean slate – and everybody is on the same page with that as well.” 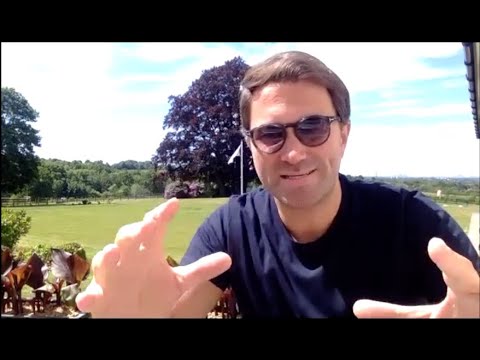 Eddie Hearn on Joshua vs Pulev

The ongoing COVID-19 pandemic has destroyed the sporting calendar for the last three months, including Joshua’s mandatory title defence against Bulgarian Kubrat Pulev, which had been slated for Tottenham Hotspur Stadium in June. Now Hearn says the plan for his man is clear – just one fight in 2020.

“There’s no rush now, before it was ‘we must try and get the Joshua fight in by end of July or early August so we can get another fight’. Everybody’s accepted now – Joshua included – that he will only fight once this year.

“So somewhere between September and December is when you’ll see AJ’s fight. I would like it sooner rather than later – he hasn’t boxed since December and it’s never great to be out for a year but it is what it is. He’s accepted that. So I would rather it as early as possible rather as late as possible.”

Both the Joshua and Pulev camps are now trying to find a venue for the fight, with the Roman amphitheatre in Pula, Croatia, one of the possibles mentioned.

Hearn said: “That’s really more come from Ivaylo Gotzev, who is Pulev’s promoter. We’ve had about five or six approaches from different countries to stage the fight. And Croatia is one of them, something we’re looking at – it’s a great arena. We don’t close our doors to any opportunities, but our absolute plan from the start is to stage this fight in the UK. And we don’t know what is the situation in September/October/November/December? Are they gonna start letting in 1,000, 5,000, 10,000 – maybe nothing at all. And if we can have no crowd, I think it’s very unlikely you’ll see Joshua/Pulev in the UK.”

Hearn again though did make the caveat that if the only option for AJ to fight in 2020 is behind closed doors, he will not rule it out with the IBF, WBA and WBO king having not fought since that points defeat of Andy Ruiz Jr back in December 2019.

“I won’t let AJ’s momentum and career get disrupted by just saying we’re not doing it behind closed doors. I’ve spoken to AJ, he would fight here at Fight Camp against Pulev – he has no problem fighting behind closed doors, but I would rather try and make sure that wasn’t the case.”