Frank Sanchez says he is ready to fight any top-10 heavyweight in his next fight – including the division’s marquee stars Tyson Fury, Anthony Joshua and Oleksandr Usyk.

‘The Cuban Flash’ improved to 18-0 (13 wins inside distance) with a technical decision victory over Nagy Aguilera (21-11) in Arlington, Texas on Saturday night.

And afterwards the 28-year-old – ranked by three sanctioning bodies and #6 with the WBO – set his fights on moving up to elite level. 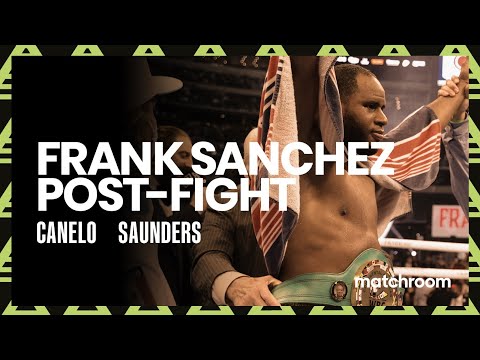 Sanchez was clearly not happy with the ending of Saturday’s fight. Aguilera went to the canvas in Round 6 claiming he had been hit on the back of the head. Replays suggested the punch skimmed his shoulder and grazed the back of his head.

“I’m glad I won, I’m happy that I won. I was beating him every round and little by little I was breaking him down,” said Sanchez.

“He knew at some point he was gonna lose the fight so he quit the fight. I would have preferred to knock him out, I like to knock people out. But he knew that’s where it was going, so he tried to justify his loss by quitting.

“I finished my fight well, I did everything my corner told me to, (Sanchez trainer) Eddy Reynoso told me what to do and I followed instructions and I just finished the fight the way he told me to.”

Sanchez was delighted to get the opportunity to fight on the enormous Canelo vs Saunders show at AT&T Stadium.

“I’m very happy with the public – it was an amazing crowd. This event is humungous. It’s really good for me. I did what I was supposed to do and I’m very happy to be in front of this crowd.”

Sanchez is just one of a host of stars working under trainer of the moment Reynoso. And training alongside the likes of P4P king Alvarez is something the Cuban clearly relishes.

“It’s been a beautiful experience working with them, working with Canelo. He’s taught me a lot – he’s always told me footwork is better than any heavyweight and I’ve got to concentrate on that.

“Eddy Reynoso’s the best trainer, he’s taught me a lot of things. It’s just a beautiful experience to be in camp with them and learn every day from Canelo. We work out all the time together and it’s just been beautiful.”