The pair are slated to meet for the WBO interim world heavyweight title, with Anthony Joshua set to defend the main title against Tyson Fury in an all-British blockbuster.

Usyk came out earlier this week on Twitter to describe the offer his camp had received from the Joyce side as “unsuitable”, and that there was a counter made.

Joyce’s team made us an offer. The offer was unsuitable, so we made a more viable counter-offer. Joyce shouldn’t think too much of himself and fall in line with everyone else. I’ll be the one making the final decision.

Warren though says he’s stumped by that claim, saying he’s never seen a counter-offer and Usyk’s management are not aware of it either. Speaking on his Queensberry Promotions’ YouTube channel, he explained:

Warren believes Team Usyk also has one eye on what happens with those tense Fury vs Joshua negotiations. If that fight does not happen then Usyk should be first in the queue to challenge Joshua for the WBO title. Warren says whatever, Joyce will be in the ring again soon.

“I think they’re waiting to see what happens with Tyson and AJ. Joe’s gonna be out anyway, he’s gonna be fighting some time in May or early June, he’ll be out.” 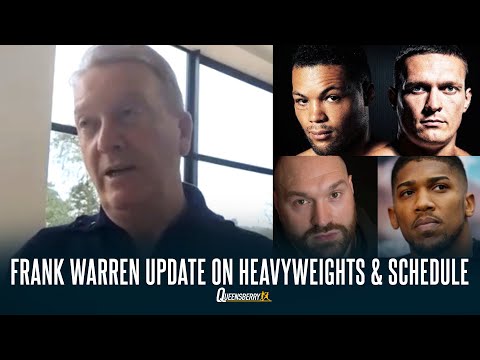 The news that Fury and Joshua have signed contracts was greeted with much relief earlier this week. But their two-fight deal as yet does not have a date or a venue for the first meeting.

While the Middle East looks hot favourite to play host, the COVID-19 situation globally means travel restrictions and the ability to have live gates will play a massive part. As of now, that picture is still not 100% clear.

When the fight does happen, Fury and Joshua are set to earn around $100million for that first meeting alone. It’s hoped they will clash in June or July with an immediate rematch in November or December.

It’s possible the winner would relinquish the WBO title after that first meeting crowns the first undisputed world heavyweight champion since 1999. That possibility, of course, gives extra significance to a Usyk vs Joyce showdown.