Deontay Wilder should “kiss Mark Breland’s backside” instead of firing him, according to promoter Frank Warren.

Warren co-promoted Fury when he shattered Wilder’s unbeaten record with a seven-round beatdown at the MGM Grand Garden in Las Vegas last February. Wilder’s co-trainer Breland threw in the towel to save his man from further punishment.

‘The Bronze Bomber’ (now 42-1-1) apparently never forgave Breland for that though and the two have since parted company. Warren says Breland should instead be praised for saving his fighter from a terrible beating.

One year on from that night exactly, Warren spoke to The Lowdown on his Queensberry Promotions YouTube channel. And Fury vs Wilder 2 was the hottest topic of conversation.

Warren said: “What a fabulous night and what a great job Tyson did. He was phenomenal wasn’t he? Again he went into the fight for some reason with a majority of people as an underdog, but he went in there and absolutely destroyed Deontay Wilder.

“Deontay Wilder will never be the same fighter after that, he (Fury) done a fabulous job and put himself as the number one heavyweight in the world. Which is what he is.” 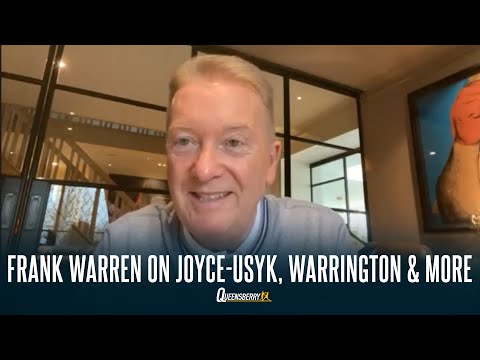 Warren says he is “disappointed” by Wilder’s wild claims since his defeat, explaining: “As I’ve said before, I quite liked Deontay. Leading up to the fights, obviously him and Tyson were getting at it. I had quite a bit of respect for him, but since the fight he’s gone down in my estimation, the rubbish he’s coming out with.

Warren was tight-lipped about the ongoing negotiations for a Fury vs Anthony Joshua superfight – and appeared to poke fun at rival promoter Eddie Hearn as he fended off questions.

“We adhere to what we agreed to in the negotiations, that we wouldn’t say anything until it’s done, and that’s where we are,” he said.

“You don’t get any snippets from us, you get that from the snippet man.”

The way for Fury vs Joshua to be for the undisputed world heavyweight championship is now clear. That is because WBO mandatory challenger Oleksandr Usyk will face Joe Joyce for the interim title instead of pushing for a shot a Joshua.

Warren gave an update on that fight, saying: “At the moment we’re negotiating and we’ll see where we go with the negotiations. And then we’ll make a decision.

“It’s a very good fight, there’s no doubt about that. It’s a great opportunity for Joe, he got that in defeating Daniel Dubois so he’s got that fight, and it could be his big moment. We’ll see how we go with it, we’re talking at the moment, see where those talks get us to.

“April will be too soon, we’re in March next week, they’re not gonna be ready for April. Early May with a bit of luck.”

Dubois on the way back

Daniel Dubois meanwhile is ready to start preparing for a ring return after suffering a fractured eye socket in that defeat by Joyce back on November 28. And he may do so with a new trainer in his corner.

Warren explained: “His manager is Martin Bowers and his brother Tony advises with him. I understand they’re having a meeting with Mark Tibbs this week and then see what happens, see where it goes.

“I’ve met with him (Dubois) a couple of times. He got the all-clear last week so now he can resume training and he’ll be out some time in May.”