David Haye says Tyson Fury and Anthony Joshua deserve every cent of the mind-boggling purses being mooted for their summer superfight.

Latest reports suggest Saudi Arabia is putting up a site fee of $150million for the showdown planned for late July/early August. And that both men will earn a cool $75million each.

They deserve every penny – Haye

Former world heavyweight champion Haye does not begrudge the two fighters those riches – even in a pandemic work. He told BT Sport: “I love it. They both deserve every single penny. They’ve both fought the very best there is out there and finally they’re putting it on the line together.

“Whoever has stumped up that 150 mill for them, thank you very much. Because we finally get to see who is officially undisputedly number 1 and it’s been a long time since that’s the case.” 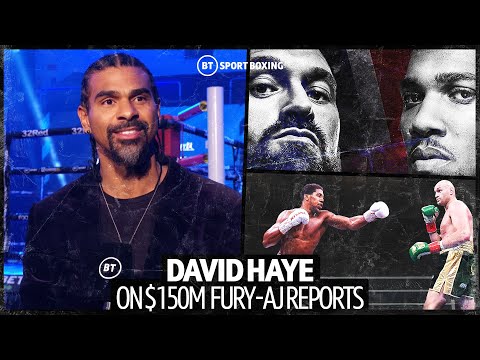 The summer in Saudi Arabia brings brutal heat to the table as well as a ton of money. Joshua’s promoter Eddie Hearn has also stated that Fury vs Joshua will take place indoors. And Haye backed that up.

The heat will be on in Saudi

“They must have some sort of indoor venue with some air conditioning – it’s over 50 degrees in the summer in the Middle East.

“This fight needs a big venue, it needs to have a crowd. It’s one of the biggest heavyweight fights ever. Numbers wise it is the biggest fight ever. We need as many Brits to get over there as possible to make some noise.”

In recent weeks Haye had openly doubted whether the superfight – for the undisputed heavyweight championship of the world – would take place this summer. But now – with the money involved being openly talked about – he has changed his mind.

“$75million gets someone in the ring for sure. Anything other than that, I was thinking maybe end of the year maybe next year. But $75million will make both AJ and Fury jump in the ring, wherever it is in the world.”

The city of Jeddah is hot favourite to host Fury vs Joshua, and the pair are expected to have an immediate rematch following their first meeting. They signed contracts on a two-fight deal back in March. The first fight has a 50-50 revenue split, with the winner taking a 60-40 upside for the rematch.