I made Tyson Fury what he is – Steve Cunningham

Tyson Fury turned 32 on Wednesday, and he was able to blow out the candles while sitting atop the heavyweight division with millions in the bank and an even brighter future to look forward to.

But it has been a rocky road to the top of the mountain for the WBC, Ring magazine and lineal heavyweight champion – including that near three-year hiatus in which mental health issues and huge weight gain sent him spiralling to the brink of boxing oblivion.

Inside the ropes though Fury has been taken out to deep waters too – despite what Anthony Joshua might have you believe.

And one of the toughest nights of his career came against former cruiserweight king Steve Cunningham on his United States debut at Madison Square Garden on April 20, 2013.

‘The Gypsy King’ was dropped by Cunningham in the second round and had to dig really deep to come back and win via a crushing seventh-round knockout.

And Cunningham – now 44 – believes that night changed Fury for ever and turned him into the fighter he is today.

He told Sky Sports: “Our fight made him switch gears. It showed the people that he can switch gears, that he had a solid chin, that he can get off the floor after being hit with a hellacious shot, then evolve in the fight to secure a win.

“What else did our fight do for him? It changed how he prepares. He said: ‘That won’t happen again’. He weathered a storm.”

The whipping overhand right that put Fury on the seat of his pants wasn’t just a lucky shot – it was something which Cunningham credits his trainer – the late, great Naazim Richardson – for planning from the moment the fight was agreed.

“The day we signed a contract to fight Fury, we went to the gym and Brother Naazim told me: ‘You will knock him onto his back pockets with this punch…’

“We drilled the overhand right every day. I mean every day. Brother Naazim stood on a big tractor tyre holding a medicine ball, and I would punch it.

“Fury threw a lazy jab, I ducked under it and connected with the overhand. It was not a conscious thought; it was muscle memory.” 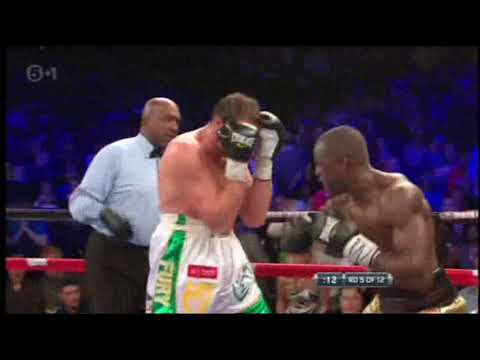 While Fury had to overcome adversity that night, Cunningham also came out of the bout with high praise for the offensive firepower he boasts.

“I’ve been knocked down probably 20 times in my career, but I’ve got up every time except against Fury. People said: ‘Cunningham doesn’t have a chin’. But do I stay down? No. Staying down is not having a chin.

“Amir Khan, I love to watch him for his speed, but he does not have a chin. He goes down then gets up with wobbly feet and has been knocked out numerous times.

“A guy can get hit all day and not go down. That’s a great chin. The chin that Fury and I have? You can go down, but you still get up and kick ass.

“Deontay Wilder landed two clean right hands in the first round of his second fight with Fury, but they did not even make him blink! Fury has a database: ‘I have felt that power now’.”

Ultimately Cunningham believes that night in boxing’s spiritual Manhattan home was a massive learning curve for Fury – one which he subsequently squeezed every last drop of value from.

“He learned to evolve because he was goofing off with everybody else then realised, with me: ‘I can’t hit him’.

“Brother Naazim says you can take damage or knowledge. Fury took knowledge. I did too. That fight changed me, but it helped to change Fury even more so.

“He got an education from a pure boxer with a bit of power. I’m not known for my power.”