When John Fury spoke on TV last weekend about his son’s potential showdown with Anthony Joshua, it wasn’t subtle. He sent a very clear message – the time for talking is over, it’s time to deliver.

Contracts may be signed for the all-British world heavyweight title unification match. But Team Fury continue to openly doubt whether the fight will actually happen next as planned.

Tyson even came out a couple of weeks ago to say he’d stopped training and was taking a break – a couple of days later contracts were signed and the fight was official. 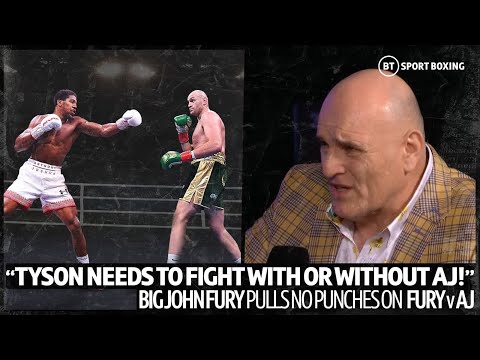 Now the camps are deep into a reported 30-day window to finalise a venue and date for the superfight. The Middle East remains hot favourite but the longer this goes, the more London and Las Vegas could come back into contention.

Either way, the message from Fury Sr was a clear one – finalise the Joshua details or Tyson will fight somebody else. He will fight twice in 2021. His son has been inactive now for 13 months. It will be even longer by the time he eventually faces Joshua.

So perhaps that open doubt was designed to bring the same results we had a couple of weeks ago. Fury Sr definitely still doubts whether the Joshua camp actually want the fight.

Fury vs Joshua, or not

He told BT Sport: “We need to get him (Tyson) out, whether these cowboys get the job sorted – which I don’t think they’re gonna do. What have they signed? They’ve signed nothing in my eyes. They’ve got no date, no venue, no nothing.

“Tyson needs to fight twice this year, with or without AJ. Tyson is not bothered by any heavyweight on the planet. He’s past all that being bothered about this man or that man.

“It’s a business for Tyson, and we need to move on and get a living properly and sharpen his tools and keep him sharp inn case that big night comes knocking.

“But I think they’re dragging their heels a bit because they don’t want it. Don’t blame them.”

Aside from whether Team Joshua are really all in or not, Fury Sr also feels the current pandemic means staging an event this large may be outside of financial reality right now.

“What does it mean if you can’t get a date and a venue? If nobody is willing to put the money up. It’s all about somebody coming forward and saying ‘right, I’ll pay for the fight, I’ll stage the fight’. Where are these people?

“That’s the position it’s in, and I don’t think they can get it together, it’s too big for what’s happening in the climate the world’s in at the moment. I just don’t think the time is right for a fight of that magnitude with the state of the world at the minute.

“We’re getting over a pandemic or in the middle of a pandemic, whatever it may be, I don’t know. The world may never be the same as we knew it ever again. I’m pretty sure it won’t be.”