Skip to content
Fury vs Joshua News All side bets are on: Hearn confident AJ will stun Fury

All side bets are on: Hearn confident AJ will stun Fury

Eddie Hearn is oozing confidence that Anthony Joshua will shock Tyson Fury when they finally lock horns – in fact he is already dreaming of collecting on some high-profile side bets.

The Matchroom supremo revealed on June 10 that his man has agreed in principle the financial structure of a two-fight deal with ‘The Gypsy King’. And as well as the potential for a huge payday for all concerned, Hearn also has the carrot of some chunky side bets for the big showdown.

And the Essex magnate says what he sees and hears from Joshua makes him ultra-confident that AJ – currently a 6/4 underdog to prevail (Fury is the 1/2 favourite) – will achieve his dream of becoming undisputed world heavyweight champion. 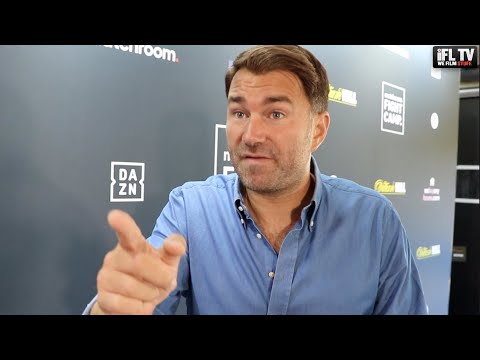 All the big talk this week surrounded an offer from Fury’s co-promoter Frank Warren’s Queensberry Promotions to stage a number of high-profile bouts pitting its stars against Matchroom fighters.

While it remains to be seen whether that will come to fruition, it did at least result in Hearn and Warren speaking – literally for the first time ever.

Hearn revealed on Wednesday: “Someone said he’d left a message, got out of the (Harper vs Jonas) press conference, checked my voicemail, he had left a message, gave him a buzz  and just said ‘listen, once we’ve got Fight Camp out of the way, and we’re through August and into September, we’ll have a chat’

“I don’t mind, no problem having a bite to eat with him. Lots to discuss, lots of issues to get out of the way, we’re a million miles away from making any fights. But no problem in having a bit of grub and discussing. So we’ll see what happens in September, once Fight Camp is out of the way.”

Hearn says Bob Arum is handling Fury vs Joshua negotiations from the Fury side after the controversial Daniel Kinahan stepped back last month.