Fury vs Joshua: Otto Wallin on who punches hardest

The clamour for a Tyson Fury vs Anthony Joshua superfight continues apace, and there are many fascinating angles to this tantalising matchup. Notably ‘who is the puncher in the fight?’ Otto Wallin is one man who knows the answer.

The 30-year-old Wallin (21-1), who has faced both men inside the ropes, has spoken to FanSided about those experiences, and what the future holds in terms of his own career.

Wallin gave Fury a major scare when they met at the MGM Grand in Las Vegas in September 2019, opening a huge cut over the right eye of ‘The Gypsy King’ in round three and giving the current WBC king some horrible moments before Fury eventually prevailed via unanimous decision.

Otto also has plenty of experience of Joshua, meeting the IBF, WBA and WBO world heavyweight champion twice in the amateurs and acting as a sparring partner ahead of AJ’s first world heavyweight title fight against Charles Martin back in 2016. To this day Wallin believes Joshua is the hardest puncher he’s ever faced.

He explained: “We fought twice as amateurs, and I was sparring him in 2016. We sparred a lot there when he  fought Charles Martin.”

“And I’ve got both those fights (their two amateur meetings) on tape. When I watched it, I feel like it could of gone either way, but it was close fights. I felt like I need one more shot to beat him. The third time is the charm.

“The one that punches the hardest is Joshua.” 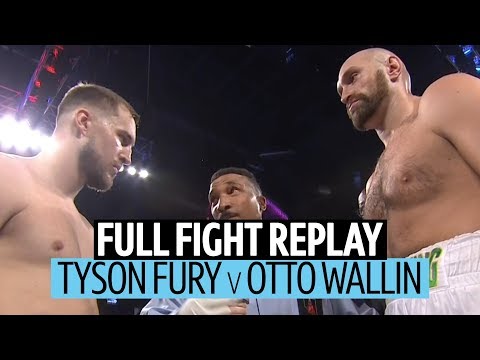 Wallin meanwhile looks back on that battle of attrition he waged with Fury, and feels in some ways opening up that cut actually affected his own chances adversely.

“I was happy when I saw that cut because I knew that one more punch, and that could be it,” said Wallin.

“One thing I would say is that I could have paced myself a little better. I started off good in the fight, but I lost some steam towards the second half of the fight, and he took over more.

“It (the cut) could have distracted me a little bit because I tried to go after his head a little more and tried to hit the cut. I felt like that maybe played in his favour because he’s got good defence and good head movement. He wants you to go for his head like that.”

Wallin is back in action on February 20 when he faces former two-time world title challenger Dominic Breazeale. That will be on the undercard of Adrien Broner’s ring return in Uncasville, Connecticut. Showtime will air in the United States.

Breazeale (20-2) will be a useful benchmark for Wallin’s ambitions to move further up the heavyweight ladder. His world title challenges both ended in defeat, at the hands of Anthony Joshua and Deontay Wilder. He has not fought for some 33 months since that defeat by Wilder in May 2018.

Wallin vs Breazeale is just part of what is shaping up to be a cracking heavyweight boxing schedule in the first half of 2021. It also includes Alexander Povetkin vs Dillian Whyte 2 on March 6, plus an expected Oleksandr Usyk vs Joe Joyce collision in April.

Then of course comes – we hope – the big one. Fury vs Joshua is expected to happen at last in June. Likely in the Middle East due to the stringent COVID-19 restrictions which would scupper a large crowd attending in the UK.