Deontay Wilder will be ready to face me – Fury

Tyson Fury has no doubts that Deontay Wilder will be ready to meet him in their trilogy fight later this year. And no doubts too that he will demand the ultimate respect.

‘The Bronze Bomber’ had surgery for a bicep injury as well as providing other excuses (notably the weight of his ring walk costume) after suffering his first professional defeat at the hands of ‘The Gypsy King’ in Las Vegas in February.

And Wilder (now 42-1-1) has been pretty silent in recent weeks, with some prominent boxing figures such as Matchroom supremos Barry and Eddie Hearn openly wondering if the fight will even go ahead as planned later this year.

Fury though responded to that speculation by telling IFL TV: “I don’t have any doubts. Let me tell you, and I’ll tell the whole boxing world now because I know they’re gonna be watching eagerly and anticipating what I say. Deontay Wilder is a beast, he’s a lion, he is a king, he is a world champion heavyweight boxer.”

While some experts saw Wilder’s crushing seventh-round TKO at the hands of Fury as a limited fighter with a big punch finally being exposed for his technical limitations, Fury believes it was just a blip for the American.

“No matter which king it’s been, throughout the great great long line of kings in boxing, of worlds, or countries and everything, they all have slip-ups now and again –  every one of them whether it’s in sports or ruling or whatever,” said Fury.

“I’m a big believer – and I can stand and say it because I’ve been there and done it – it’s not what pulls us down but how we get back up from it. A man’s character is only justified by adversity in his life. And if everything’s smooth sailing all the time, we don’t know how strong of a character we really are.

“There’s a song that I like to use – ‘along with the sunshine, there has to be a little rain sometimes’, yeah?. If we had Marbella weather all year round yeah, we wouldn’t appreciate it. But because we live in England and we have wet weather, we have seasons, we have frosty, we have snow, we have cold, wind, rain and grey.- when we do get 30 degree sunshine we’re all outside having a beer in the garden and we absolutely love it. And I suppose that’s what it is with boxing. 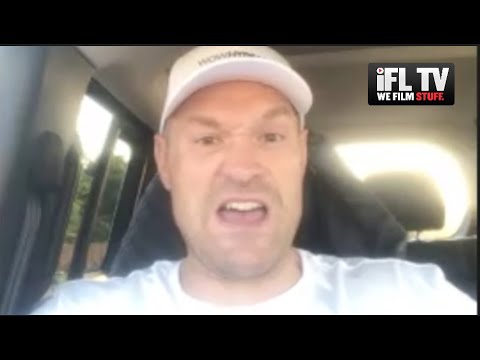 “I think Deontay Wilder – his little bit of rainy time is with me, and it will stay with me – but as soon as he gets past that it will back sun shining again. And you know if anybody writes Deontay Wilder off, they’re a bigger mug than I ever thought was possible.”

Wilder’s fearsome punching power (41 professional victories inside distance) is well known, and Fury believes there are only two men who can give him problems – one being pretty obvious!

“Deontay Wilder barring none – even today – is the most dangerous heavyweight alive, and he would wipe the floor with every other single heavyweight out there apart from myself,” said Fury.

“And I also believe that Oleksandr Usyk (17-0) would give him problems. They’re the only two people in the heavyweight division alive today that could give Deontay Wilder trouble – that’s myself and Oleksandr Usyk.

“One, because I’m a absolute beast, warrior, absolute legend, lineal champion, and Usyk because he’s a master southpaw slick boxer and he’s had a lot of experience and he knows how to deal with punchers, with power punchers.

Because of his belief that Wilder is by no means a spent force, Fury has no plans to take it easy heading into the third fight.

He vowed: “I will train and dedicate harder for the third fight than I did for the first and second fight – I don’t think I can train any harder because that’s just ludicrous and stupid ‘cos I’ll leave it all in the gym.

“But one thing I will do – I will dedicate my life and soul and every bit of strength, and I’ll push it in the right direction, when I go to fight Deontay Wilder for the third time because that is the type of respect that Deontay Wilder, ‘The Bronze Bomber’, needs. The ultimate respect from any man, because it only takes one punch from that man and it’s game over, man.”