Tyson Fury vs Deontay Wilder 3 goes down at long last in Las Vegas on Saturday night, and today (Wednesday) the fighters come face to face for the final press conference on the Strip. 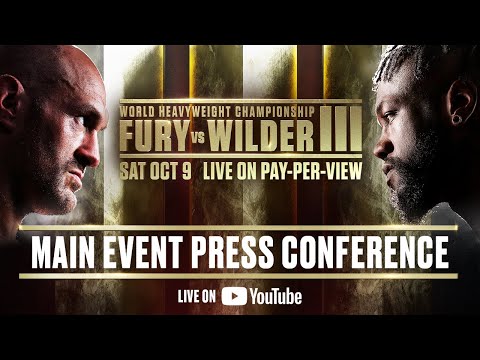 It’s now 20 long months since ‘The Gypsy King’ and ‘The Bronze Bomber’ met for a second time – also in Las Vegas. That night Fury not only dethroned Wilder and took away his unbeaten pro record, he posed questions about the American’s future at the highest level.

Such was the manner of Fury’s seventh-round stoppage victory, many wondered whether Wilder could ever back to rule again. But here we are, almost two years on and a legal ruling down the line, and Deontay gets his shot at redemption.

Wilder winning that arbitration ruling in May to force this bout also scuppered that planned Fury vs Anthony Joshua unification match planned for Saudi Arabia in August. It’s been a wild year in the heavyweight division – despite this pair not fighting yet in 2021.

This final press conference should be fascinating in its own right. Remember the last time these two came face to face was in Los Angeles to announce this bout – which was then set for July 24 (later postponed to October 9 after Fury tested positive for COVID-19). And that particular press conference caused a ton of headlines.

Wilder for his part refused to take questions, keeping his headphones firmly on throughout proceedings. Then when the two engaged in the normal staredown on stage, it lasted more than six minutes with neither apparently willing to blink and walk away first.

In the end it was Wilder who made the first move, leaving Fury to claim an initial victory. What will happen tonight? We await with much interest as the countdown to the biggest fight in the remainder of 2021 ticks on.