This is a preview of Tyson Fury vs Deontay Wilder 3 – you can click here for a full report on how Fury won a sensational fight via an 11th-round stoppage.

Tyson Fury vs Deontay Wilder 3 is finally about to happen on Saturday October 9 after yet another delay when Fury and members of his team tested positive for COVID-19 in early July 2021.

Fury and Wilder had been initially slated to meet in the second half of 2020 in their trilogy meeting – but when a final bid to stage it on December 19 failed, the game appeared to be up.

Fury “moved on” and instead signed up to meet Anthony Joshua twice in 2021 in huge unification fights. Which left Wilder very much on the outside looking in when it came to the title picture.

Wilder’s team, confident it still had the right to that third bout, took the case to arbitration. And on Monday May 17, 2021, arbitrator Daniel Weinstein ruled in their favour.

His ruling said Fury must fight Wilder for a third time by September 15, 2021 with no chance of a step-aside payment to Wilder delaying things. ‘The Bronze Bomber’, quite simply wanted this fight more than he wanted money. 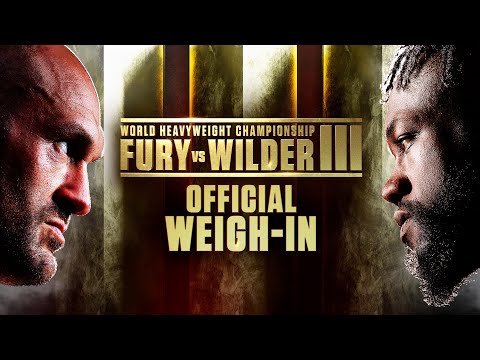 So it appeared to be full steam ahead for Fury vs Wilder 3, on Saturday July 24 in Las Vegas, Nevada. Fury signed his contract for the bout on live TV during ESPN’s coverage of Josh Taylor vs Jose Ramirez on Saturday May 22.

The pair came face to face in a Los Angeles press conference in June, and engaged in a six-minute staredown after Wilder had worn headphones during the conference and refused to take media questions.

We were just over two weeks out from fight night when the news emerged on Thursday July 8 that Fury and members of his team had COVID-19, and the bout would yet again be postponed.

Fury and Wilder have already met twice for the World Boxing Council (WBC), Ring magazine and lineal heavyweight titles before their trilogy showdown bit the dust.

Their first meeting came soon after Fury’s astonishing comeback from mental health issues and ballooning in weight to 400lbs.

The bout ended in a controversial draw at Staples Center in Los Angeles in December 2018. This despite Fury having to get off the floor twice.

‘The Gypsy King’ made no mistake in the eagerly-anticipated rematch though as he battered Wilder to a seventh-round TKO at the MGM Grand Garden Arena in Las Vegas in February 2020. That was he first defeat of Wilder’s professional career.

There was much surprise given the manner of his defeat that Wilder immediately triggered the rematch clause and exercised his right to a third fight.

The trilogy fight between Tyson Fury and Deontay Wilder will now take place on Saturday October 9, 2021.

Fury vs Wilder 3 will be another joint pay-per-view production in the United States between ESPN and Fox Sports.

ESPN has a five-fight deal with Fury worth a reputed £80million while Fox has a deal with Wilder’s promoter, Al Haymon’s Premier Boxing Champions (PBC).

The fight will be shown by BT Sport Box Office in the UK. The network has shown all of Fury’s recent fights and has a strong relationship and contract with Warren’s Queensberry Promotions. You can access a Wilder vs Fury 3 live stream on all major accepted devices only by signing up for the official pay-per-view with BT Sport. You can stream the fight on the BT Sport Box Office app.

The controversial subject of illegal streams was much talked about after the rematch, with claims from piracy expert Wayne Lonstein of VT Solutions that up to 20million people may have watched the bout in this way.

Fury vs Wilder 3 six-minute face off

Fury and Wilder met for the press conference to officially confirm the fight on Tuesday June 15, 2021.

The highlight of the Los Angeles gathering was an epic SIX-MINUTE face-off between the pair, with neither man apparently wanting to break it up and lose a mental edge.

Eventually it was Deontay who put on his sunglasses and walked away, to cheers from team Fury – who shouted “we’ve won”.

Time will tell whether it matters in the grand scheme of things – but it was high drama and pure theatre.

Not surprisingly given the manner of his victory in the rematch, Fury is a strong favourite to defeat Wilder for a second time.

UK bookmakers have ‘The Gypsy King’ is a best-priced 4/11 to retain his WBC, Ring magazine and lineal heavyweight titles. Wilder meanwhile is very much the outsider and is biggest at 5/2.

The draw – obviously not impossible given the outcome of the first fight – is a best-priced 28/1.

Meanwhile in the United States Fury is a best-priced -275 to prevail again while the best price about Wilder is +250.

Our expert has previewed the big fight and you can click here for his analysis, prediction and tips.

The weigh-in for Fury vs Wilder 3 took place in Las Vegas on Friday October 8, 2021 and both men bulked up for the occasion.

While the final PPV buy figure of 850,000 in the United States for the rematch was seen as slightly disappointing to many observers given the might of a joint ESPN/Fox promotion, the fighters still did pretty nicely out of it.

According to Forbes’ list of the biggest-earning athletes in the last 12 months, Fury took home a whopping $26million (£21million) for a very successful night’s work. The majority came from PPV upside. Wilder meanwhile pocketed around $25million (£20million).

In theory – despite the one-sided nature of their second fight – the trilogy when it happens should rake in even more revenue with Fury having only boosted his profile in the United States.

Tyson Luke Fury was born in Wythenshawe, Manchester on August 12, 1988 and now resides in Morecambe, Lancashire. He has enormous physical tools (amazing when you consider he weighed just one pound at birth).

Fury has lived up to his name and remains unbeaten as a pro at 30-0-1, 30 victories and one draw in a total of 31 bouts. Twenty-one of Fury’s victories have come inside distance.

There are two distinct segments to Fury’s career – the first going from his debut on the undercard of Carl Froch vs Jean Pascal back in December 2008 right through to that epic victory over Wladimir Klitschko in Dusseldorf in November 2015.

‘The Gypsy King’ upped his record to 25-0 that night and the world looked to be his oyster.

Instead he was on the brink of boxing oblivion. 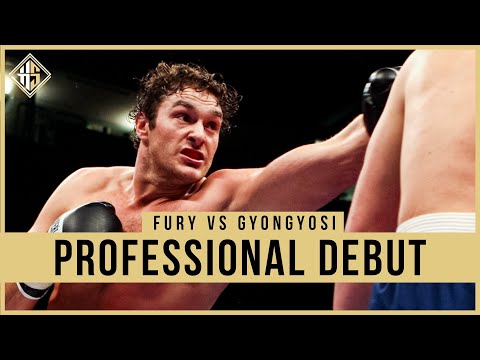 Mental health issues and thoughts of suicide, and massive weight gain up to 400lbs, left many experts wondering if he would ever fight again. What followed is one of sport’s greatest comeback stories.

Almost three years after that night in Germany, Fury began the long road back.

Within two bouts he was back in the firing line at the very top level. And taking on the man widely acclaimed as the most devastating puncher in the sport – Deontay Wilder.

Despite still not being back to prime fighting shape, Fury performed highly creditably in outboxing his opponent.

He got off the floor twice to hear the final bell before being handed a draw. Many experts were convinced he won comfortably.

Two more interim fights followed as he christened his five-fight £80million US TV deal with ESPN. They brought wins over Tom Schwarz and Otto Wallin (despite a horrible cut) in Las Vegas.

And then – on February 22, 2020 – Fury crowned his incredible comeback story. Under the tutelage of Kronk disciples Javan ‘SugarHill’ Steward and Andy Lee for the first time, he shocked the world. Wilder was battered to a seventh-round TKO.

Now the trilogy with ‘The Bronze Bomber’ awaits. And after that the enormous carrot of a potential unification double-header with Anthony Joshua in 2021.

Despite that devastating defeat by Fury in February, Wilder still boasts a stellar resume. He has a professional record of 42-1-1, 42 victories, one draw and one defeat.

Wilder has often come in for criticism from experts. They believe he is not only unorthodox but also technically a very limited fighter.

But he has always possessed a pretty decent cure for that – dynamite in both fists.

Deontay is one of the biggest punchers around – notably putting Fury on the floor twice in their first meeting.

On more than one occasion Wilder has gone into the later stages of fights needing a knockout. Most recently that rematch win over Luis Ortiz. Until the rematch with Fury, he had always managed to find it. 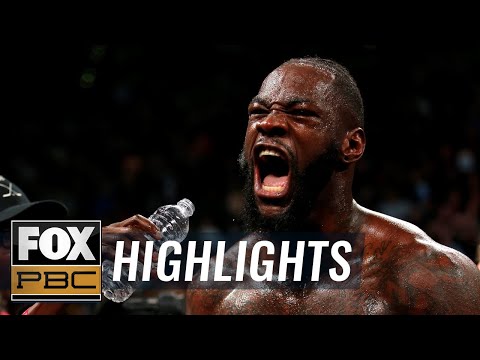 He would retain the belt for a total of 11 defences – culminating in the defeat by Fury. Those defences including wins over Dominic Breazeale, Eric Molina and Chris Arreola.

Now the experts who doubted his boxing ability all along are asking an even more searching question. Has he been exposed for ever at the very highest level? Or can he adapt and come back stronger…

As heavyweight geeks we don’t remember being this excited about an undercard – not one, not two but three fascinating fights involving some of the most promising big men around.

Brooklyn-based Pole Adam Kownacki (20-1) gets the chance to avenge that first career defeat at the hands of Finn Robert Helenius (30-3) when they rematch.

Even better, exciting Nigerian heavyweight prospect Efe Ajagba (15-0) meets fellow unbeaten prospect Frank Sanchez (18-0) in what should be a beauty. Fights like that – between two young men with perfect records – just don’t happen that often.

Last but not least, the highly-touted Jared ‘Big Baby’ Anderson (9-0) looks to continue his 100% KO streak against an opponent who is as yet unnamed.

Another knockout artist – Edgar “The Chosen One” Berlanga (17-0 with 16 inside distance) – meets former world-title challenger Marcelo Esteban “El Terrible” Coceres in a 10-rounder, while Julian “J-Rock” Williams will face Mexico’s Vladimir Hernandez in a 10-round junior middleweight bout.