Deontay Wilder and Tyson Fury met for the first time at Staples Center in Los Angeles, California on December 1, 2018, with the bout ending in a highly controversial draw.

The fight was the most eagerly-awaited in the division since Anthony Joshua’s stoppage of Wladimir Klitschko at London’s Wembley Stadium in April 2017.

For Fury it was the first fight back at the very highest level as he continued his remarkable comeback from the brink of boxing oblivion. Almost three years out of the ring punctuated by mental health issues, suicidal thoughts and huge weight gain (he topped 400lbs at one stage) were now a thing of the past as he sought to regain the title he won against Wladimir Klitschko in Dusseldorf, Germany in 2015.

Fury went into the bout promoted by Frank Warren’s Queensberry Promotions, while Wilder was promoted by Lou DiBella and Tom Brown’s TGB Promotions. Fury was trained by Ben Davison while heading up Wilder’s corner were Mark Breland and Jay Deas.

Fury vs Wilder results and report

This eagerly-awaited bout had a dramatic result to match as Fury and Wilder fought to an epic but highly controversial draw in front of a 17,698 crowd at Staples Center.

Fury – unsurprisingly given Wilder’s notorious punching power – preferred to box from the outside and use his superior technical skills to try and dominate the fight.

This strategy worked for most of the evening but there was always the danger he would be caught by ‘The Bronze Bomber’ and so it proved. ‘The Gypsy King’ was knocked down twice – in rounds 9 and 12.

The first knockdown came via a short left hook and overhand right, and the second – in the 12th and final stanza – has now gone down in boxing folklore as one of the sport’s iconic moments.

Fury appeared to be done for when Wilder connected with a hard right-left combination sending him crashing on the canvas. As referee Jack Reiss began his count Fury lay motionless on the canvas as Wilder prepared to celebrate victory. The game appeared to be up for ‘The Gypsy King’. 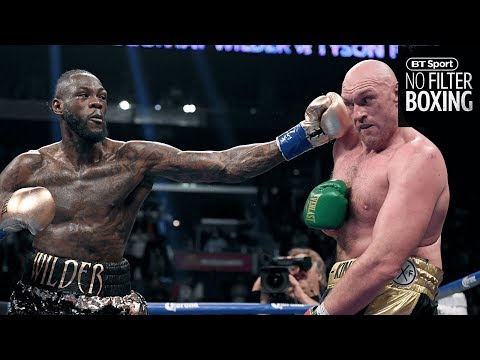 But then – as the count reached six – Fury bounced up a la The Undertaker to roars from the astonished crowd – as well as Wilder and the TV announcers ringside. And amazingly he managed to recover well enough to be on top again by the final bell.

Afterwards Fury said: “We’re on away soil, I got knocked down twice, but I still believe I won that fight. The world knows I won the fight. I hope I did you all proud after nearly three years out of the ring. I was never going to be knocked out tonight. I showed good heart to get up. I came here tonight and I fought my heart out.”

Wilder meanwhile also believed he’d done enough to win, stating: “I think with the two knockdowns I definitely won the fight. I started overthrowing the right hand and I just couldn’t adjust.”

Both fighters stated they wanted a rematch, which would eventually take place on Saturday February 22, 2020.

If the 12 rounds of action hadn’t proved dramatic enough, the scorecards – as so often in heavyweight championship boxing – would provide yet more.

Many experts believed Fury had outboxed Wilder convincingly enough to have won the bout despite suffering those two knockdowns, but it didn’t turn out that way.

Mexican judge Alejandro Rochin scored the bout 115-111 in favour of Wilder – to the astonishment of many – while Canadian Robert Tapper had it 114-112 for Fury.

The casting vote would go to British judge Phil Edwards and his scoring just could not separate the two fighters – returning a 113-113 draw.

Stats from respected source Compubox showed Fury was more accurate on the night, landing 84 of the 327 punches he threw (a total of just under 26 percent. Wilder meanwhile was the busier fighter with 430 punches thrown but he landed just 71 (just under 16 percent).

Fury vs Wilder TV and PPV

Fury vs Wilder was a pay-per-view fight in both the United States and the UK – the first time a heavyweight bout enjoyed this much network focus since Lennox Lewis vs Mike Tyson back in June 2002.

Both men were given a guaranteed base purse with an upside based on the final pay-per-view numbers.

According to figures filed with the Calfornia State Athletic Commission (CSAC), Wilder received a guaranteed base purse of $4million while Fury received $3million. However those fees obviously didn’t include the PPV upside both fighters will have subsequently taken home.