Anthony Joshua may have crushed Kubrat Pulev last month as he continues his ring renaissance, but Teddy Atlas still believes he would be put to the sword by Tyson Fury right now.

The ninth-round knockout of Pulev in London last month was AJ’s second victory since he suffered that devastating first career defeat by Andy Ruiz Jr in June 2019. And while respected trainer and analyst Atlas sees signs of recovery he says Joshua is not back to the man he was before that fateful night in Madison Square Garden.

Speaking on his ‘The Fight’ podcast, Atlas said: “Joshua’s not the same. He’s Humpty Dumpty that got broken into a million pieces. But he did get put back together. I’m not knocking him at all, I’m giving him credit. He came back after being devastated in that first fight with Ruiz. And he gave up, he spit the bit.

“I think the big difference with him now and then is, he wants to be great again. We live in moments. That moment when Saturn lined up with Venus and Jupiter and all other stuff with the planets and the life of Joshua, he didn’t care about being the greatest fighter – the greatest heavyweight – in that moment in the first fight with Ruiz. For whatever reason, I’m not gonna attempt to explore the reasons.

“I’m just giving you what was apparent from his action, his behaviour, when he allowed the referee to stop the fight when the referee asked him if he wanted to continue. I don’t think there’s any debating that.” 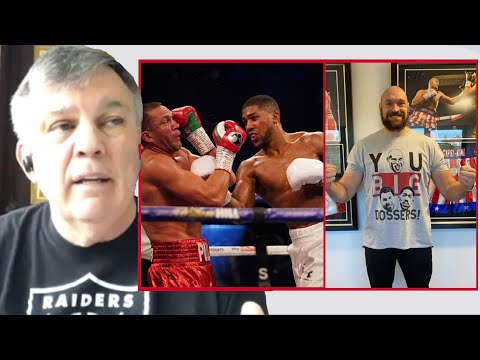 While Atlas praised Joshua for at least beginning that journey back to the devastating force he once was, he re-iterated that journey is by no means over. And it may never be.

“But now he cares about being that guy again, but there are remnants of that. Our mind is the addict and there are ghosts that are still floating around in that addict of Joshua, those ghosts of the first Ruiz fight. They floated back and forth, they’re not gone.

“He’s done a helluva job of closing the windows – he has. But ghosts can get in between the cracks and they’re still in there.”

Atlas believes AJ’s rehabilitation from the Ruiz loss was also helped greatly by having Pulev as an opponent last month.

“He’s lucky he had Pulev. Pulev’s not that much. He’s 39 years old, showed a good chin when he wanted to, and heart. But he’s got no instincts at all, he doesn’t react well to punches coming at him. It looks like he’s had no teaching. He stands straight up. Everything he (Joshua) threw – he threw a straight right, it landed. He threw a left hook, it landed. When he snapped the jab he couldn’t miss Pulev.

“Pulev is robotic, there’s no instinctual mannerisms there. He took some shots when he wanted to, but he was also gone in that early part when he turned his back. The referee, nobody would have argued if he’d stopped the fight there.

Joshua is confidently expected to meet Fury next in a huge unification match – likely in late May or early June. Atlas though does not believe he is ready for that yet.

AJ not ready for Fury….yet

“I don’t know if he’s ready for that test yet, my inclination is that he’s not. Maybe one more fight, maybe. But right now the edge is Fury. What he (Joshua) did show me is he’s improved off the second Ruiz fight where he was trying to be Muhammad Ali and just move all over the place and looked very fragile in the moments when Ruiz at 283lbs even threatened like he was going to do something.

“He made another transition towards being better, he settled down again, he became more that guy who set the punch again. He wasn’t on his wheels all night, on his tricycle. So he’s becoming more that guy again, and he wants to be more that guy again. But it takes time, if it ever happens, to come all the way back.