Joe Joyce is a man in a hurry in boxing terms, at the age of 34 and with only 10 professional bouts to his name. No wonder then that he’s targeting a heavyweight title in the next two years.

‘The Juggernaut’ (10-0 with 9 KOs) faces German Michael Wallisch at BT Sport Studios in Stratford, London On Saturday (July 25, live on BT Sport). And if he comes through unscathed there is a planned domestic showdown with the hugely exciting Daniel ‘Dynamite’ Dubois (14-0 with 13 inside distance) at London’s O2 Arena on October 24.

Having only come into the pro ranks recently after an illustrious amateur career, Joyce knows time is not on his side. And while Wallisch and Dubois may be next, he already has at least the corner of one eye on the likes of Tyson Fury and Anthony Joshua.

He told BT Sport Boxing: “I thought this year I’d start getting some big fights, and I had a choice of who to fight next. Dubois was a very interesting name with a lot of belts, so that was the fight I went for. It was almost there (the bout had been initially scheduled for April 11) but then the virus obviously postponed it, it’s finally gonna happen in October, fingers crossed.

“These are the fights I want to be in – from beating Dubois, he’s got a name that’s been built up and then I’ll take that, and then I’ll take it to the next level and get in a heavyweight title in the next two years. I’m open for all fights – definitely some big names out there to fight. It’s exciting and I just want to leave a legacy and do what I set out to do, be world champion. Once I can do that, I’ve achieved something in boxing and what I planned to do.”

First up for Joyce though – as he returns to the ring after a year-long absence largely thanks to the COVID-19 pandemic – is fellow 34-year-old Wallisch (20-3 with 13 KOs), and he will not be taking the German lightly.

“He’s a good strong fighter and has a record to prove it. He’s been in with some big names like (Tony) Yoka and (Efe) Ajagba,” he said.

“He’s gonna be game and wanting to take my scalp so I’ve gotta come prepared, mentally prepared, because he’s gonna try and win the fight. There’s not gonna be any crowd behind to motivate me. It’s just gonna be on me and my team to get the job done on the night.”

Dubois meanwhile also has an interim fight scheduled ahead of the big October clash as he faces another talented German – 33-year-0ld Erik Pfeifer – again at BT Sport Studios, this time on Saturday August 29.

Joyce said: “Yeah I’m quite interested to see how that’s gonna go. I’ve shared a lot of training camps with Pfeifer, I know what he’s got, and it will be interesting to see how he copes with Dubois and vice-versa.”

While it’s dangerous to look past anyone, obviously with the date in stone now both fighters are ready to talk about what might go down come October 24 at the O2. And Joyce for one can’t wait – COVID-19 permitting.

He said: “Exciting stuff, that’s what I’m in boxing for. Hopefully it’s gonna be a sellout event if it can be. Explosive – it needs to have a crowd – the excitement and the build-up is why we all love boxing. So it needs to happen in front of a crowd and I just can’t wait to get the win.

“He’s gonna try and blast me out early on probably. I’m gonna try and not let him succeed and slip his punches. But I’m gonna be firing back at him so he’s gonna have to take some punishment from me, and as the fight goes on we’ll see how it goes. And hopefully, I can finish him off.” 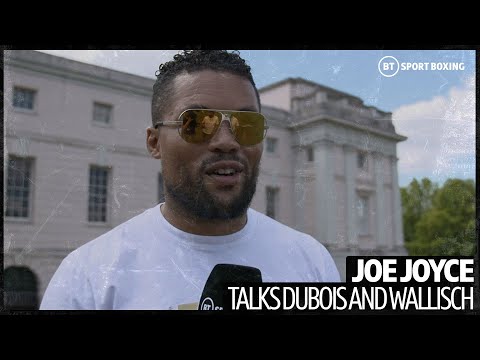 Joyce is known for his stamina, endurance and relentless style, something which he doesn’t put down solely to boxing – more his sheer sporting versatility.

“It’s just been built up over the years doing various other sports – swimming, rugby, martial arts, athletics – I think I’m just a natural athlete,” he said.

“I think I’ve built the endurance up over the years and I’ve got that second wind that can come in in a fight, I can just keeping going. I like throwing loads of punches – I like landing shots so it makes for exciting fights but then I guess I still get hit as well which I’m working on, working on improving that.

“I’ve been in the sport over 10 years now, so it’s about time I’m learning and incorporating what I’ve learnt in training – to not get hit – the sweet science of boxing.”

Not surprisingly defeat by Dubois is not really an option for Joyce – he knows it would set his world title hopes back massively as he prepares to turn 35 years old on September 19.

“I could still bounce back again and it’s gonna take longer. I wanna go the A route, the fastest route, I don’t want to be like taking no long-winded ways. I wanna go direct.”