Tyson Fury may have been talking up the threat posed by Deontay Wilder to his dream showdown with Anthony Joshua – but his dad believes ‘The Bronze Bomber’ is “mentally destroyed” and poses zero threat.

Fury and Wilder are due to meet for a third time later this year after ‘The Gypsy King’ (30-0-1) took away Wilder’s unbeaten professional record with a devastating seventh-round TKO at the MGM Grand Garden Arena in Las Vegas in February. And while he will start a hot favourite for the trilogy fight, a defeat by the most explosive puncher in the heavyweight division would throw plans for a Joshua blockbuster up in the air.

But John Fury says he believes Wilder (now 42-1-1) is “mentally destroyed” by that stunning defeat back in February, and expects his son to have an even easier fight next time round.

Fury Sr was convinced even before the rematch that Tyson would destroy Wilder, explaining to BT Sport: “You know what, I watched it (the first fight, a draw in Los Angeles in December 2018) 100 times, went all over it and examined it back to front. And I knew that Deontay Wilder could not fight going back and didn’t like pressure. And when you took it to him, the fight would go out of him. And he got humiliated and destroyed from a man that was untouchable on the night. Simple as that.” 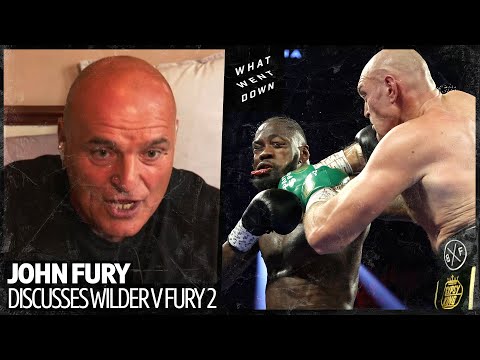 Fury has vowed not to overlook Wilder with the potential carrot of a Joshua double-header dangling right in front of him, but father John has no concerns that the upset will happen.

He continued: “I think Tyson’s very modest in what he’s saying – I don’t think he wants to frighten Deontay Wilder from having a third fight. Tyson’s being modest there. Let me tell you something – it won’t be a fight next time because he’ll just walk through him easier. And I’ll tell you why – he’s mentally destroyed and I don’t think he can come back from a beating like that in just a short time.

“Beatings like that, they stay in you, you never get rid of ’em, you never get over that. And at the end of the day I just think that Deontay Wilder next time, he’ll be turning up purely for the paycheck because he knows the outcome.

“He knows Tyson’s too good for him – Tyson’s too strong, too big and he’s only getting better and better. And Deontay Wilder, he ain’t getting no better. In my book you’ve seen the best of him, that was the best he could ever be. He was 16 and a half stone, he was as strong as he was gonna be, and he looked like a kid in there against a man. Tyson was just too good in every department.

“I don’t think Deontay Wilder has got anything to beat Tyson with to be fair with you – yeah he’s a big puncher and anything can happen in boxing – we know that. But Deontay Wilder’s too mentally destroyed to even come close to beating Tyson, that’s my honest opinion.”