Skip to content
Fury vs Joshua News Joshua on Fury: The longer they leave it, better for me

Joshua on Fury: The longer they leave it, better for me

Anthony Joshua has issued a stark warning to Tyson Fury and his camp: Don’t leave it too long because I’m getting better every day.

AJ feels he is still improving and that the longer it takes to make the dream all-British unification clash, the better chance he will have.

Joshua defends his IBF, WBA and WBO heavyweight titles against Kubrat Pulev at SSE Arena, Wembley on Saturday night. He is expected to win, and that would clear the path to a Fury showdown next summer.

Joshua (23-1 with 21 wins inside distance) told ‘Off The Cuff’ on DAZN: “I feel like the longer they leave it, the harder it is for them because I’m improving. I’m still an improving fighter, I’m getting stronger, I’m getting smarter, which is a blessing. So in that sense yes, I’m looking forward to it. But at the same time I don’t want all the glitz and the glamour, I just want to fight. So it’s a balance isn’t it. 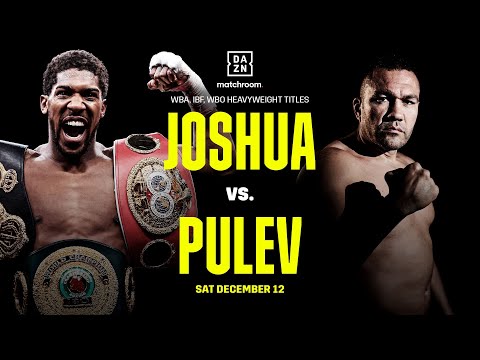 “It’s gonna be massive, it’s gonna be a spectacle, with or without it I’m not interested. It’s just me, and another opponent in the other side of the ring.”

Joshua of course has already overcome significant adversity by recovering from that first professional defeat by Andy Ruiz Jr in the summer of 2019. He easily won the rematch in Saudi Arabia in December 2019.

“When you take a loss like that it’s just you, you and that man in the mirror,” he said.

“You’ve got everyone around you saying: ‘Don’t worry, you’ll be back’. Then you close your doors to the world and you go to bed on your own. And it’s you and your thoughts.

“Nobody can tell you how to deal with it. You’re just learning on the job. I think haivng a mature head is important, having good people around you at the same time when you wake up is important.”

One man who praised Joshua for the way he handled that loss to Ruiz Jr, was Fury himself.

“I am glad the way I dealt with it, but I don’t need Tyson Fury to tell me that,” remarked AJ.

Joshua: I do study Fury, respect him

“That’s the fighter talk. But I respect him as well. He’s a great champion, he’s done well for himself. I study him as well, he’s done great things for the sport of boxing. And long may it continue so one day we can meet at the top.”

Joshua showed his boxing ability in that rematch with Ruiz Jr, fighting smartly at distance to outpoint his opponent. He says despite that he is still ready to rumble when necessary.

“When I started boxing it was really quick, everything happened so quick. It was tough, I got battered because a lot of mistakes I was making. I just got one of those mindsets – ‘you hit me with five, I hit you with six’. So I was really rough and ready.

“So before the sweet science, I understood the school of hard knocks. So I was champion from the amateurs and then champion in the professional world. And then I lost at a high level and people were giving Andy (Ruiz Jr) a lot of attention. I was like ‘Wow, that’s what it’s like to be champion’.

“Even though I may have received my fair share of attention, I didn’t look at it as attention. It was just part of a job. It wasn’t anything special. But when I saw Andy having his success, I thought: ‘That’s special, that’s amazing, I want some of that’. And I understood now what it meant to be champion of the world and I really wanted to get better from there on.”