Anthony Joshua’s world heavyweight title defence against Kubrat Pulev will likely take place in the UK in November according to his promoter Eddie Hearn.

The fight had been set for Tottenham Hotspur Stadium on June 20 before the global COVID-19 pandemic shut down the world of sport in March.

Now boxing is starting to open up again – albeit behind closed doors. But Hearn is extremely confident that by November, crowds will be allowed back into UK arenas, paving the way for Joshua to defend his IBF, WBA and WBO belts against the 39-year-old Pulev (28-1).

Hearn told Sky Sports: “He’s back training, he sent me a picture yesterday of him on the bike putting a big session. November is the date that fight will take place. We’re starting to see some changes now in Government legislations that make me feel very confident that by November we will be allowed crowds back in arenas.

“So we’re making enquiries for arenas, we want that fight to take place in the UK. I spoke to Bob Arum (Pulev’s co-promoter) last night about numerous different things, AJ against Pulev was one of them. I believe you’ll see that fight in the UK in November.”

Joshua may be a heavy 1-8 favourite to beat Pulev (5-1), but with a blockbusting unification match against fellow Brit Tyson Fury on the horizon Hearn doesn’t believe he will take the Bulgarian lightly.

“Well I think he’s made a little bit of that mistake before, hasn’t he – when the Andy Ruiz fight came around everybody was talking about Wilder, everybody was talking about the undisputed fight, and sometimes if you take your eye off the ball – and it’s the same mindset with Whyte/Povetkin, that’s why we can’t get too caught up in that mandatory – we’ve got to deal with that. 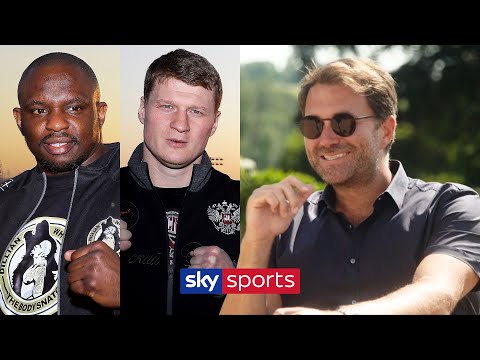 “I think AJ right now is firmly focused on Pulev, because he knows if he doesn’t beat Pulev, there’s no Fury fight. So he’s gotta go out, he’s gotta do a job. By the time he gets back in the ring it will be nearly a year since he’s boxed.

On June 10 Hearn announced that the financial structure of a two-fight deal between Fury and Joshua had been ‘agreed in principle’ and he remains upbeat that they will meet twice next year despite the boxing politics which threaten to delay or even scupper the dream match. He does though believe that one of the fights will take place outside the UK.

“I think next summer, I think there’ll be two next year. Everybody knows we’d love this fight to take place in the UK. It’s a fight between two Brits for the undisputed heavyweight world championship. But there is so much interest from around the world, that I do believe one of these fights will take place outside of the UK. And I’m happy to do one and one out.

“But I would be really disappointed if we couldn’t do one of those in the UK, but ultimately the fighters, their close team, they’ll all make a collective decision. Whilst I want it in the UK, I just want the fight. I want the fight, I wanna see AJ become the undisputed heavyweight champion of the world. Wherever it is – even if it’s here (Matchroom’s Brentwood, Essex HQ) – it will be super special.”