Skip to content
Fury vs Joshua News AJ on Wilder: ‘It starts with a b and ends with a h’

AJ on Wilder: ‘It starts with a b and ends with a h’

Joshua vs Wilder has yet to take place inside a boxing ring, but AJ has finally aired his views on the former WBC heayvweight king – and it doesn’t make pleasant listening for the ‘Bronze Bomber’.

AJ says he maintained a diplomatic silence after Wilder was battered to an astonishingly one-sided defeat by Tyson Fury in Las Vegas in February. But now, two months later, he has pulled no punches about his feelings towards the flashy American.

“I went into my drawer and pulled out my long list of things to say,” Joshua said on DAZN’s Boxing With Chris Mannix. “I’ve got a lot of things to say about Wilder. But you don’t knock a man when he’s down, also. That was at the top of the list. I have to stand by those principles.

“But for sure, I think me and Wilder, as I say, are cut from a different cloth. He’s what we call, it begins with a ‘b’ and ends with a ‘h’. I’m not like that. I’m more of a man. I don’t really get on the internet talking crap. The only times you’ve seen me talk recklessly is against Dillian Whyte and against Jarrell Miller. But other than that, I’m an ambassador of the sport.

“I’m trying to be clean. I’m trying represent my sponsorships. I’m trying to represent DAZN properly. I try to stay away from the typical stereotype of a heavyweight boxer. It’s difficult, but I have it in me to fire up and talk recklessly when needed.” 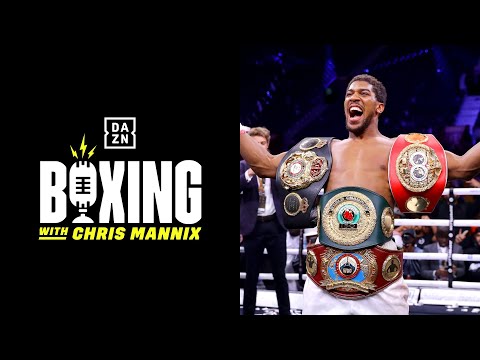 Joshua said he wasn’t hugely surprised by Wilder’s dismantling at the hands of Fury, and questioned the level of the Bronze Bomber’s opposition during his professional career.

“I just believed when Deontay Wilder gets to top-tier level I thought it would be difficult for him to stay there because he had so long bubbling around mediocre fights.”

AJ, not surprisingly, feels he would have had a comfortable night if the Bronze Bomber had accepted DAZN’s huge offer to make Joshua vs Wilder a reality in 2019.

“When you look in a warrior’s toolbag, and I look at Deontay Wilder’s toolbag, he has a right hand. So I say, ‘How do I take away the right hand?’ It’s hard for a fighter to throw a powerful right hand moving backward. So we need to put him on his back foot and be dominant in that sense. How do we take away the right hand when he’s on his front foot? I needed to practice slipping it, making it shoot over my head – the same thing with the lead hand.

Joshua’s very future meanwhile appeared to be on the line when he fell to a first professional defeat at the hands of Andy Ruiz Jr in June 2019. But the Londoner was quick to avenge that loss with a flawless unanimous decision in the rematch in Saudi Arabia in December.

“It was a one-sided fight,” he said. “It was a classic display of the sweet science, hit and don’t get hit. Take the belt with ease and get back on the gravy train. Andy couldn’t move his feet and throw his hands fast enough to keep up with me. I won 11 of the 12 rounds if I am generous.”