Joshua will be easiest fight for Tyson – Tommy Fury

Tyson Fury will have the easiest fight of his career when he finally faces Anthony Joshua, according to his half-brother Tommy.

The Love Island star himself (3-0 as a professional) is preparing to return to the boxing ring on Friday November 13.

But he already has one on on his half-brother’s potential heavyweight title unification against Anthony Joshua. Fury and Joshua have already agreed in principle the financial structure for a two-fight deal. The first of which could take place as early as April 2021.

Tommy told Queensberry Promotions: “For me I’ve always said it. That’s gonna be Tyson’s easiest fight I think.  It depends how Tyson wants to box.  We all know he can box one of two ways now. He can box how he did against Wilder, putting the pressure on, going forward. Or he can box on the back foot.” 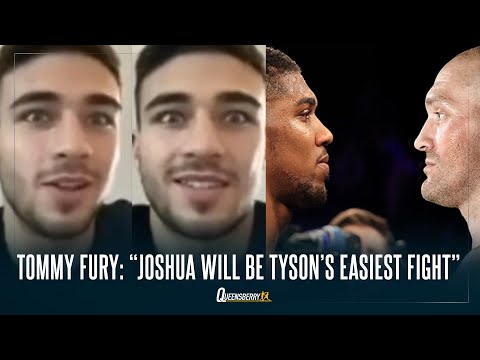 Tommy says he has always imagined Fury vs Joshua will play out in a similar way to Tyson’s rematch with Dereck Chisora back in November 2014. A one-sided beatdown which resulted in an easy victory.

“I’ve always envisioned that fight like Tyson and Dereck Chisora 2. Just getting played with, you know Tyson’s on the outside literally playing like a cat on a piece of string.

“But Tyson’s looking like a wrecking ball now, under ‘SugarHill’ as well, his physique and his training, he’s just much more powerful, much more stronger.

“I think if he walked to Joshua, I think he’d have Joshua out of there inside five or six rounds. That’s not me being biased or anything, that’s just my opinion.”

Light-heavyweight Tommy’s return to the ring will be on the undercard of Mark Heffron vs Denzel Bentley 2 on Friday November 13. The show will be screened live by BT Sport.

Tyson meanwhile returns to the ring at the Royal Albert Hall on December 5. His opponent is yet to be confirmed, with Carlos Takam (39-5-1) and Agit Kabayel (20-0) the frontrunners at this stage.