Robert McCracken has been involved at the very top level of boxing since before the turn of the century, first as a pro fighter and latterly as a brilliant trainer of world champions.

Before AJ, he built his reputation as a trainer with granite-chinned Nottingham super-middleweight star Carl ‘The Cobra’ Froch and has been involved in some of British boxing’s biggest nights over the past decade.

There is a quiet authority about McCracken, a man who refuses to get caught up in the hype or hoopla which most egocentric modern-day trainers seemingly run towards.

A product of the busy Birmingham boxing scene, McCracken was good enough to win a British title outright at super-welterweight before moving up to middleweight in 1995.

He won and defended the Commonwealth title at 11st 6lbs before challenging American Steve Holmes for the IBF world middleweight title in April 2000. He was stopped in the 11th round at Wembley Arena and would have just one more fight. That was a loss in a British, Commonwealth and European middleweight title dust-up against the mercurial Howard Eastman.

Yet while McCracken never tasted world title glory as a fighter, he has more than made up for it as a trainer and has been the man in the corner for Joshua for over a decade now. There is an obvious mutual respect between the pair and the man who has guided AJ since 2010 will be hoping his charge can finally become undisputed world heavyweight ruler by beating Tyson Fury in 2021.

A little-known fact is that McCracken was actually the man in the corner for Fury’s pro debut in Nottingham back in December 2008. That was the same night Froch beat Jean Pascal for the WBC super-middleweight title live on ITV. McCracken had a busy evening as he also cornered ‘The Gypsy King’ for his debut against Bela Gyongyosi.

A notoriously private individual, not much is known about McCracken’s level of wealth as he is not the type of personality. The opposite of somebody like Floyd Mayweather Jr, who flaunts his. What is not in dispute is that he likely will have made far more financially from his training career than he did from his own pro career inside the ropes.

He has been Team GB’s Performance Director since he was appointed in November 2009, while also guiding Froch to world-title glory and multiple title defences at 12st.

The once-accepted norm in terms of a purse split for a trainer in boxing was, and in a lot of cases still is, 10%. However, most really big pay-per-view fighters usually pay a negotiated fee per fight to their trainer as opposed to a percentage.

For example it is highly unlikely McCracken will be on 10% of Joshua’s fight purses as this would make him one of the richest men in British boxing.  It is an inexact science of course and can work both ways.

In 1976 for example, when ‘Sugar’ Ray Leonard and his team were looking for a trainer to guide Ray to superstardom, they hired Angelo Dundee. Dundee had made his name and his fortune with Muhammad Ali and knew his worth so he demanded, and received, 15% of Leonard’s net purse money on a six-year deal.

This was later negotiated down as the brilliant American took on the baton from Ali as the most marketable and recognised name in the sport.

Forbes reported that Joshua earned in the region of $60million for his 2019 rematch with Andy Ruiz Jr in Saudi Arabia, so there is no doubt that McCracken would have been well remunerated for his own efforts in that fight.

AJ was rated at 19 on the latest Forbes Highest Paid Athletes list with a figure of $47million, so any victory over Fury would see Joshua and McCracken’s stock and respective bank balances rocket in 2021.

McCracken is of course best known as the trainer of Joshua, who he has known since AJ’s time on the GB squad prior to the 2012 Olympics. The Londoner claimed gold at super-heavyweight in 2012, and ever since Joshua turned pro in 2013 McCracken has been the man in his corner.

Together they blazed a trail through the heavyweight division, and the trainer was the first man in the ring to congratulate Joshua when he knocked out Charles Martin to win the IBF world heavyweight title in 2016. 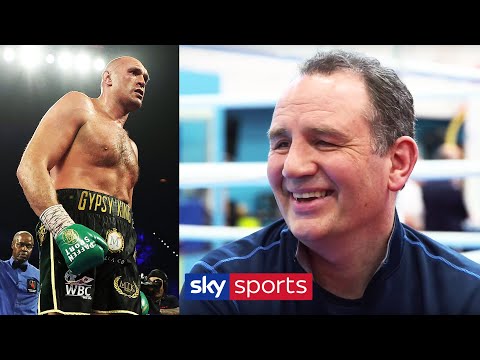 Six successful title defences followed, including that staggering fight in front of 90,000 fans at Wembley against Wladimir Klitschko in 2017. Joshua climbed off the floor to stop Klitschko in the penultimate round after an epic battle.

It was pandemonium at Wembley that night, but McCracken’s calm head was needed. He knows how to conduct himself in the corner, and like all of the greats is always calm, clear, considered and concise with his instruction.

The defeat by Andy Ruiz Jr in New York in summer 2019 came as a hammer blow to Joshua and his team. However AJ and McCracken demonstrated their close bond, and that they are the ultimate boxer-training partnership.

Boxing history is littered with high-profile world champions who have axed their coach as soon as they suffer a loss (see Deontay Wilder) but Joshua and McCracken sat down and analysed their New York nadir and came up with a plan.

During the Sky Sports on-demand special ahead of the immediate rematch, AJ: The Untold Truth, the boxer lashed out anyone who felt he should dump his long-serving coach.

“Whoever said that is a clown. Part ways with McCracken? No way. These people don’t understand loyalty. These people aren’t cut from the same cloth, if that’s what they are suggesting. Whoever has that mindset should not bother talking to me, if they have that mindset,” he said defiantly.

Time spent diligently preparing physically and mentally for that Saudi Arabia return clearly paid off. Casuals may have criticised the risk-averse strategy as being ‘boring’ as Joshua cruised to a unanimous win on the cards. But they were the same casuals previously criticising the Londoner for getting into in a war in New York.

The summit is in sight now as McCracken gets his charge physically and mentally prepared for the biggest test of his career against Fury.

McCracken’s first world champion was Froch. The Nottingham man held the IBF, WBA and WBC super-middleweight titles at various points of a brilliant career and won 33 of his 35 pro fights. McCracken was in the corner for all of them as Froch built a reputation as an aggressive fighter with a fabulous chin.

McCracken’s approach to the fight game emphasises integrity and courage and Froch had both in spades. ‘The Cobra’ became a household name and fought two epic encounters with George Groves.

Their first fight was mired in controversy with Groves stopped on his feet at the MEN Arena in 2013 while still very much in the fight. However, Froch settled the argument emphatically at Wembley Stadium in May 2014. He signed off his own career with a TKO victory in round eight in front of 80,000 fans.

McCracken is the Performance Director of GB Boxing and has responsibility for all aspects of performance for fighters on the Podium and Podium Potential squads.

Since he was appointed in November 2009, GB Boxing has enjoyed an amazing period of success which has seen men and women from the squad win 48 medals at 16 major international competitions.

McCracken’s achievements perhaps peaked in the amateur code at the London 2012 Olympic Games when Great Britain finished top of the medal table for boxing with three gold (including Joshua at super-heavy), one silver and a bronze.

In his own amateur career McCracken represented Great Britain when they used to prepare at Crystal Palace, though that base has since moved to the English Institute of Sport in Sheffield under his stewardship. Joshua also now prepares for his fights there under the tutelage of McCracken.

Robert will be leading Team GB in Tokyo for the delayed 2020 Olympics, where Pat and Luke McCormack and Caroline Dubois have legitimate gold-medal claims.

Before McCracken the trainer there was McCracken the fighter. The Brummie battler turned pro in 1991 in the super-welterweight division.

He streaked to 18-0 and then in February 1994 won the British title by outpointing the dangerous Andy Till. He defended his Lonsdale belt twice by outpointing Steve ‘The Viking’ Foster and Paul Wesley.

The Foster fight at the NEC in Birmingham made headlines after a wild, chair-throwing riot as McCracken’s Birmingham supporters clashed with Foster’s fans, who had travelled en masse from Salford and Manchester.

Trouble had been anticipated with promoter Frank Warren taking the unprecedented step of segregating fans (the first time it had happened in a British boxing arena). But this did not stop supporters engaging in some riotous behaviour at ringside.

The fight was the main event of the UK leg of a boxing double bill on two sides of the Atlantic. It also included Lennox Lewis vs Michael Grant in New York later the same night.

It wasn’t to be for McCracken, a fiercely-dedicated fighter who had nevertheless been inactive for a year going in. Ref Alfred Asaro stopped the contest in the 11th round.

There would be one last hurrah against Eastman in April 2001, but McCracken was outboxed and stopped in round 10 by ‘The Battersea Bomber’. As a fighter McCracken was harder than a coffin nail and he finished with a highly respectable 33-2 (21) pro record.

McCracken lives with his wife Laura, a self-employed personal trainer. They have four daughters – Madeleine, Martha, Matilda and Tatum. After four daughters, McCracken’s wife finally gave birth to a boy who they named Emmett James McCracken.

McCracken rarely gives interviews and is an ‘old school’ boxing type who likes to keep his professional and private life separate.

Froch, his first world champion, is particularly close to McCracken. The trainer said in 2012″ “We’ve never had a contract; we did it on a handshake years and years ago. He asked me to have a contract but I said ‘no, we’re mates”.

One of his proudest moments came in 2013 when he was awarded an MBE for his services to boxing by the Queen at Buckingham Palace.

Whatever happens from here, McCracken’s long association with Froch and Joshua has assured him a permanent place in British boxing history.