Andy Ruiz Jr was true to his word on Friday as he looked in great shape at the weigh-in for his return to the ring vs Chris Arreola in California on Saturday night.

Ruiz Jr had been a flabby 283lbs when he lost his world heavyweight titles to Anthony Joshua in Saudi Arabia in December 2019. He had been 268 when he stunned AJ at Madison Square Garden six months earlier.

But now under the tutelage of superstar trainer Eddy Reynoso, Ruiz Jr says he has found discipline for the first time in his career. And it shows in his physique.

Gone are the “chi chis” and gut which stopped him being able to throw his punches properly, and he looks in terrific shape for his first fight in 17 months. He duly tipped the scales at 256lbs (18st 4lbs). Some 27lbs lighter than that last bout.

Andy is two stones heavier than Arreola, who weighed in at his lightest ever weight of 228lbs (16st 4 lbs) at the ripe old age of 40. 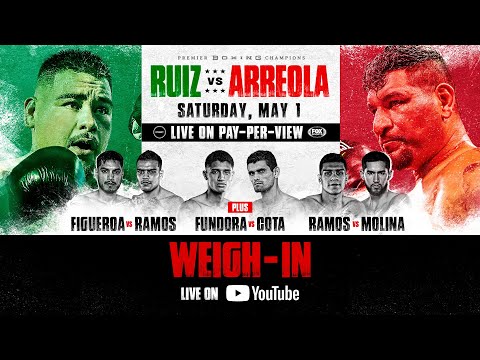 Ruiz Jr admitted he ballooned to 310lbs in the aftermath of the AJ loss but is now walking around more than 50lbs lighter. We’ll see on Saturday night what that transformation means when he steps inside the ropes.

He is now aged 40 and like Ruiz has not fought since 2019. What does he have left to offer? We’ll find out on Saturday.

Ruiz vs Arreola heads up a FOX pay-per-view card in Carson, California and the show retails for $49.95.

Ruiz vs Arreola on UK TV

UK viewers will be able to watch the fight via BoxNation on the Premier Sports platform.

You can check out exactly how Ruiz and Arreola looked on the scales by clicking on the video link in this article. You’ll also be able to see the fighters weigh in for all of the undercard bouts.