Tyson is ‘the force’: Teddy Atlas on Fury vs Joshua

Teddy Atlas believes Tyson Fury is “the force” in his superfight with Anthony Joshua in more ways than one, and fancies ‘The Gypsy King’ for a stoppage win.

Training great Atlas believes Fury is the star of the show inside and outside the ropes. Both in terms of promoting the massive heavyweight title unification bout and then in terms of delivering a winning performance on fight night.

Speaking on his ‘THE FIGHT with Teddy Atlas’ podcast, he said: “So it’s the fight everyone wants to see, it’s gonna be a mega mega fight. I’m gonna favour Fury. I think Fury could stop him, I like AJ – he’s a good fighter, he’s got good talent, he’s had a great comeback. I like all that. I’m not gonna say he has a china chin, but I’m gonna say Fury has a better chin.

“I’m gonna say that he’s (Joshua) been to dark places when he got stopped by Ruiz. Now he found a light and he lit the room up and he’s back into a place that’s lit. I just don’t think he’s that far away from a power shortage. I think there could be a blackout again.

“When I say the electricity, the light, I attach that to confidence, mental belief, strength and durability. I think that a blackout could happen in that generator of his again. He’s not far removed from being taken back to no lights.

“So I’m going with Fury. He can go get you now or he can box and potshot and move. Joshua can punch, he’s a banger, he gets into position but he’s gonna have to get into that position because Fury’s more versatile.”

As well as being Teddy’s pick to win the fight, Fury also has superstar quality in terms of his ability to sell a fight.

Fury is number one – Atlas

“Fury is the number one fighter right now – he would be the favourite going into the fight I think. But for me, he’s also the force here. Because he’s the promoter, he’s Muhammad Ali. When Mayweather knew how to promote. When McGregor promoted in UFC. That’s one of the talents, one of the elements that Fury brings to the table.”

The heavyweight division has always been boxing’s marquee weight class. And Fury vs Joshua – according to Atlas – finally provides a fight to bring it back to the head of the table. 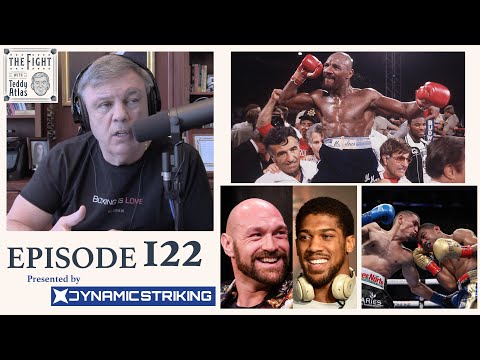 “It’s the fight that we wanted to see. Boxing goes as the heavyweights go to a certain extent – it always has.

“But the heavyweights haven’t been up to snuff – but this is the one now that brings the heavyweights back into the forefront. Again that’s always been the head that’s led the game, the head of the monster. Everybody wants and hopes to see good heavyweights.

Heavyweights back on top

“This is the fight if you’re gonna make a heavyweight fight, it’s the fight to make, it’s a huge fight. Put aside COVID with the virus – that fight could have filled two Wembley Stadiums and Wembley Stadium holds 90,000. They would have had an overflow.”

Fury and Joshua have signed a two-fight deal, with the first bout expected to take place in summer in the Middle East. An immediate rematch would then follow, hopefully before the end of 2021.

Both men are expected to earn around $100million each from their first fight alone. They currently hold all the major heavyweight titles, and their meeting should result in the first undisputed champion since Lennox Lewis in 1999.