“Theatre with blood” was how Frank Warren described boxing in the trailer for BT Sport’s epic new documentary about him.

‘Make It Or Die Trying: The Frank Warren Story’ looks back at 40 epic years of selling fights for a living for the head of Queensberry Promotions. And what a ride it’s been.

Warren began his life promoting fights in 1980 and enjoyed a glorious rise to the top – where he has stayed ever since.

From being shot in 1989 to promoting the likes of Mike Tyson, Joe Calzaghe, Ricky Hatton and so many more – Warren has experienced just about everything in the past four decades. 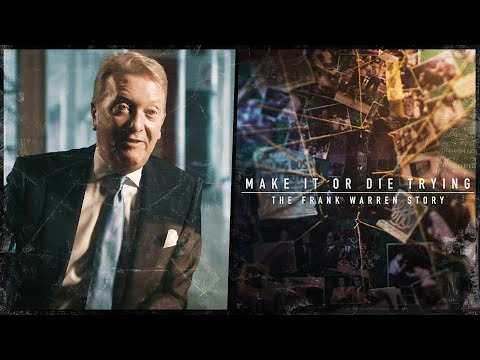 When is the Frank Warren documentary on TV?

And BT Sport have marked that notable 40th anniversary by making the documentary, which premieres on BT Sport 1 HD on Sunday April 11 at 2130 BST.

The 90-second trailer for the documentary shows Warren talking about the toughest sport of all, and how he has survived and thrived over 40 years. There is also a cameo from fellow promoter Bob Arum.

Warren said: “It’s an old adage, boxing is theatre with blood. That’s how people look at it. It’s drama, it’s one on one. Two guys in a ring putting everything on the line. And you know what, they’re doing it live in front of everybody.

“Most sportsman are selfish, and I think they’ve got to be selfish. My job is to create the opportunities for them, guide them in the right direction and make the right fights at the right time . And I love that journey.”

Arum meanwhile paid tribute to the skills and longevity of his British counterpart, saying: “To be a promoter, to survive, you have to understand you’re gonna get blows to knock you down.

“But if you’re a real promoter, like a real fighter, you get up and you keep punching and Frank does that.”

Warren meanwhile says his pure focus is on delivering. For both his fighters and his TV broadcast partner. Right now BT Sport.

“When I first started in this game there was a lot of pressure, but it becomes a way of life so for me there’s no pressure. All I’ve gotta do is deliver for the guys that I’m working with, I have to deliver for them. I’ve got to deliver them that opportunity.

“I’ve got to deliver for the TV company I’m working with. That’s what I do.”

Warren and Arum of course are co-promoters of WBC, Ring magazine and lineal world heavyweight champion Tyson Fury, who is set for that massive unification match against Anthony Joshua later this year. A match which might just be Warren’s crowning glory as a promoter given the sheer size of the show.

Fury vs Joshua is likely to be the biggest fight in British boxing history – two domestic fighters meeting for the undisputed heavyweight championship of the world. It appears likely to happy in July, probably in the Middle East.