Tommy Fury believes his half-brother Tyson Fury will “demoralise” Anthony Joshua when the pair finally step into the ring together.

The star of reality TV show Love Island has a 3-0 professional record himself at light-heavyweight, and having watched Tyson’s rise to megastardom at close quarters, he has great insight into ‘The Gypsy King’ and his talents.

Tommy Fury on Fury vs Joshua, Wilder and Pulev

Tommy sat down for a wide-ranging interview with IFL TV, including his verdict on how a blockbusting heavyweight unification fight between Tyson Fury and Anthony Joshua would play out. Here are some of the best bits:

“Joshua in my own personal opinion – of course he’s got the easier touch in Pulev. Pulev’s getting on, Pulev’s been about for a long time. I just feel he’s (Joshua) not stepping up and fighting these big fights. Instead of Pulev, why not give Dillian Whyte a shot? I know you’ve got mandatories but it just seems to me that Dillian Whyte’s been there for ever asking for a title shot. Just give him a title shot then.

“Let’s be honest, what’s Pulev gonna do? He’s gonna come with that European style – Pulev, you saw what Klitschko did to Pulev and that was years and years ago and Pulev’s had a lot of miles on the clock since then.

“So you’ve got to be switched on for the full 12 rounds, which he (Tyson Fury) is anyway, but I just feel like he’s got his number now. I think Wilder knows that in that first fight that he lost. I truly believe Wilder knows that. In the second fight we saw what happened.

“I’m 99.9 per cent sure that Joshua will come through his fight with Pulev, and then yeah, we’re there – the biggest fight in boxing history. It is going to be. We’ve never had two fighters like this as well known, as out there. It’s gonna be a crazy fight and a crazy build-up too.”

“What you’ve got to look at here, Joshua may have knocked out all these guys with one punch but who has he been knocking out? I’m not trying to discredit Anthony Joshua at all in the slightest because I think he’s a good fighter. You’re not undisputed world champion for nothing – the man can fight, of course he can.

“But when you’re talking about Tyson that’s just a different level completely. What you’ve got to look at is the guys he’s (Joshua) been knocking out. And Tyson’s just gone in there and knocked out the biggest puncher that’s ever lived probably, by going off stats it’s only fair that you call him that.

“At the end of the day Tyson’s style is awkward, his movement’s on the back foot so he can’t ever get the maximum out of his punches. And when he was going forward to Wilder with his feet placed down on the floor, planted properly, you seen the damage he did. Look at the state of Wilder after four rounds. Tyson hits hard and it’s stupid for anyone to say he can’t. He’s 6ft 9ins and he’s 18 and a half stone. Anybody says he can’t punch is stupid.

“I think yeah Tyson is a bigger puncher than Joshua – because you’ve seen him, he’s a freak of nature. You’ve seen how big that man is. That’s no artificially built man, that’s no weight training and God knows whatever.  That’s a naturally built machine.

“So bell rings, Joshua comes out to the centre, Tyson boxes on the outside and  just completely jabs his head clean off. I see triple jabs landing, I see six jabs landing because Joshua’s got slow feet and Tyson’s got very fast feet. I see Joshua trying to cut down the ring but not able to, I see Joshua coming in and getting wrapped up and just twizzled around.

“I just see a replica of – I’m not saying this any way – but when Tyson fought Christian Hammer (back in 2015) – that kind of performance I see happening to Joshua. But obviously Joshua is 10 times the man Christian Hammer is, obviously. But I see that sort of thing playing out. Joshua walking down and trying to get his shots off and he can’t, and Tyson there having fun, signalling to the crowd and whatever. That’s just what I see.”

“I believe he stops Joshua in about eight rounds, similar to the Wilder one. I see Joshua getting broken down, and demoralised, and maybe even getting pulled out by his own corner. But like I say it is heavyweight boxing, so anything can happen. I’m not being biased, I’m just speaking from pure facts, and I think everybody can agree with me, based on that last Wilder fight that he (Fury) can do it all. He can box on the back foot, he can go forward, he can fight, he can get opponents out of there. I just think he’s got an all-round better game than Joshua.” 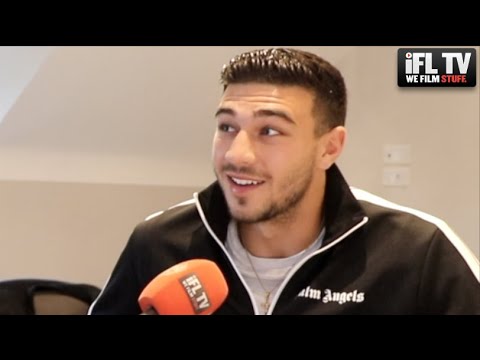 Tommy Fury on learning from Tyson

“When I seen him – I was young at the time and he was fighting on ITV4 – it was just something that I instantly wanted to do. Being around Tyson for fight weeks – for massive fights like the Klitschko fight (in 2015) – when I think back to that I still think it’s crazy. That I was there, ringside, I watched everything that was going on, fight night and fight week, post press conferences, it was all great.

“At the end of the day, I might not have said anything back then, because I wasn’t one of these jumped-up kids you know shouting his mouth, I didn’t say nothing. You watch me interviewed back then, I wasn’t really saying anything. I was watching – I was observing everything. I might have been in the corner in a little team tracksuit just hidden in the corner but I was watching everything.

Because I thought: ‘You know what, when my time comes, I’m gonna have to do all of this, the media side, the press conferences side’. And it’s put me in good stead, because I listened to all the words that the fighters said. it gives me the right knowledge to go about my business properly.”